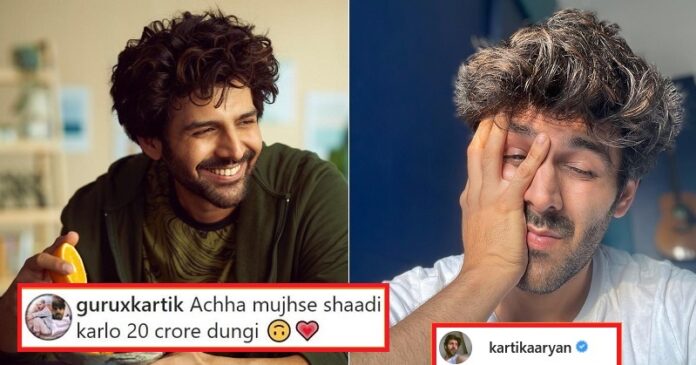 The winner of hearts, Kartik Aaryan, the Bhool Bhulaiya 2 actor recently accepted a fan’s unique proposal and left her blushing.

Kartik Aryan was last seen with Mrunal Thakur in Dhamaka. He will soon be seen in his next release Shahzada, the Hindi remake of Allu Arjun’s Ala Vaikunthapurramuloo. Shahzada also stars Manisha Koirala, Paresh Rawal, Rohit Bose Roy, Sachin Khedkar, and Ankur Rathee among others. It will release in theatres on November 4.

Kartik will soon be seen in Shahzada. The Rohit Dhawan directorial is the Hindi remake of Allu Arjun’s Ala Vaikunthapurramuloo. Shahzada also stars Manisha Koirala, Paresh Rawal, Sachin Khedkar, Rohit Bose Roy, and Ankur Rathee among others. It is set to release on November 4.

Kartik recently posted a video on Instagram, which also features the child actor, Inayat Verma who became popular after his part in the film Ludo. Inayat is mouthing one of Kartik’s dialogues from Kartik’s last release Dhamaka in the Instagram clip.

The video got a lot of hits and a lot of love from his fans, which includes the actor Ronit Bose Roy who found the video cute and adorable.

However, In the comments section of the video, one female fan of Kartik grabbed eyeballs. The fan asked Kartik Aaryan to marry her in return for Rs 20 crore. She wrote,

And, Kartik, in his flamboyant style, replied, “kab (when)”.

Several fans of Kartik reacted to his reply by laughing at the actor’s gesture of taking the female fan’s love in his stride. This is not the first time that Kartik engaged with his fans, He met two girls who kept calling out his name from outside his building in January.

Here is the clip of the video of the fans waiting outside his house: