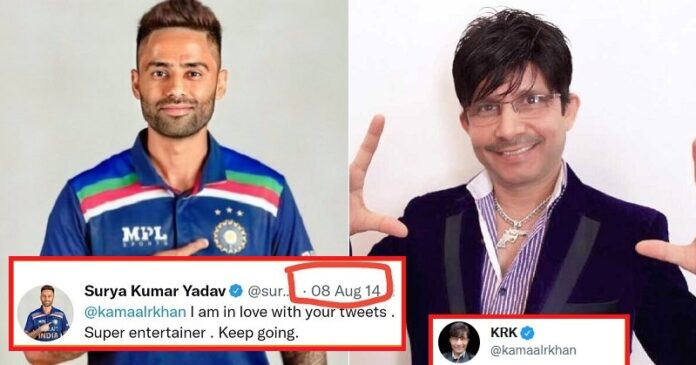 KRK aka Kamaal R Khan is a star of controversies who is often seen in the news for his controversial Tweets, where he shares his personal opinions about other people. He is one of the most controversial personalities of B-town and a self-proclaimed critic.

All over again he managed to be the talk of the town and make it to the headlines with his disputable Tweet. KRK responded to Indian cricketer Suryakumar Yadav’s seven and a half years old Tweet and stirred up the internet. The tweets have been a controversial topic of discussion on social media.

Who is Surya Kumar Yadav?

Suryakumar Ashok Yadav, the 31-year-old is an Indian International cricketer. He plays for India T20I tournaments and in the ODI. He plays for Mumbai Indians in the Indian Premier League and for Mumbai in domestic cricket. Surya is a skilled right-handed batsman and an occasional right-arm medium spin and pace bowler.

Suryakumar scored 65 off 31, as the Indian cricket team revived from 93 for 4 in 13.5 overs to 184/5 in 20 overs by securing seven sixes and a solitary boundary. He was efficiently supported by Venkatesh Iyer’s 19-ball 35 in the third and the last T20I match. He was also named as the player of the series, and player of the man.

Meanwhile, Mumbai Indians managed to retain him ahead of the upcoming edition of the Indian Premier League 2022. He will be playing next for the Men in Blue in the upcoming T20I series against Sri Lanka.

Check out the Tweets:

The netizens took this opportunity to troll KRK on social media:

It took you 8 years to reply @surya_14kumar

Who is KRK aka Kamaal R Khan?

Kamaal is an Indian film actor, writer, and producer. He participated in, Bigg Boss the reality show in 2009. He produced the movie Deshdrohi which is considered one of the worst movies in Bollywood and it received a lot of negative reviews from the audience and critics. The movie was banned later to avoid riots by the Maharashtra government. He rose to fame after his part in the reality show and Twitter.