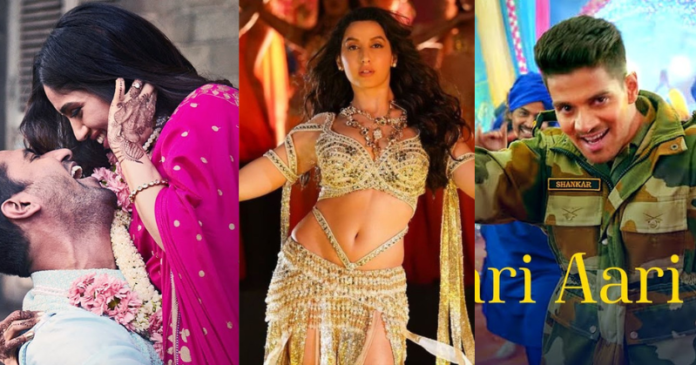 With so many Bollywood films coming out each year, it’s easy to keep up with the latest Bollywood songs even if that means remixing some old Bollywood music. You can’t deny them as party people grooving to their beats, whether you like them or not.

If you want to add some new Bollywood songs to your playlist or simply enjoy Bollywood in general, you’ll enjoy our selection of the best new Hindi music Bollywood offers!

Here is a list of the 30 latest Bollywood songs that have taken over the heart of the nation,

This song is from the Prabhas and Pooja Hegde, starred album Radhe Shyam. Mithoon composed this song, which was produced by T-Series. Enjoy the fascinating story told in this song, which is set in a snowy landscape with mountains in the background.

Kusu Kusu is a brand new Bollywood dance routine from the film Satyameva Jayate 2. John Abraham plays two characters in this film, one as a police officer and the other as a politician. Nora Fatehi is featured here, and she is crushing this song with her incredible dances.

This song should be in your playlist if you’re looking for the most recent Arijit Singh song. This romantic new bollywood song, composed by Mithoon, is part of the Radhe Shyam series, which is produced by T-series. Prabhas and Pooja Hegde star in the upcoming film Radhe Shyam.

With Humsafar, the main track from Aakhiri Mulaqaat, a melodious series, take a deep dive into this music of adoration and detest! Suyyash Rai sings Humsafar, which was directed by Lakshay and Siddharth Singh, and stars Smriti Kalra and Harshad Chopda. Take a look at the couple’s heartbreaking journey.

Do you recall the 2011 film Dus Bahane’s original rendition of Dus Bahane? This new Hindi song, 2.0, is a remake of the original, which starred Abhishek Bachchan and Zayed Khan. This rendition, like the original, includes a hook step that you will become addicted to.

This distinctive, contemporary song is from Badboyshah aka Badshah’s latest album, and Jacqueline Fernandez can be seen dancing and singing to this Durga Puja-inspired tune. This popular Bollywood song is unlike anything else Badshah has to offer, which is why we can’t stop listening to it on repeat.

This is a beautiful song from the Kartik Aaryan-Sara Ali Khan film Love Aaj Kal, composed by the highly great Pritam and sung by Darshan Raval and Antara Mitra.

This is from Vicky Kaushal’s horror film Bhoot, in which he plays our favourite chocolate guy. It’s a fun tune to listen to and dance to. Not only are Akhil Sachdeva’s words lovely, but the video is also a visual pleasure.

Tanishk Bagchi has replicated this scene from Ayushmaan Khurrana’s Shubh Mangal Zyada Saavdhan. Romy sings the Bollywood song, which is currently trendy. Yo Yo Honey Singh composed the original melody, and the video features J star and Honey Singh personally.

Twist, a popular Hindi song from the old film of the same name starring Saif Ali Khan and Deepika Padukone, is being reprised here. As much as we adore the original version of the song, the new Twist is a popular Bollywood song with a catchy hook dance.

You might enjoy this popular Bollywood Hindi song if you want to see a rock-hard Tiger Shroff just grooving and embracing the disco motions to the beats. Although the picturization in this one is lovely, with a reference to the original melodies, old is gold, as they say.

The new Ole Ole 2.0 is sure to get you moving. Why? We’re sure it brings back so many memories of the actual song from 1994, which also starred Saif Ali Khan. It’s a terrific idea to incorporate your new Hindi tunes.

The relaxing beats of this appealing, controversial tune may get even the most sedentary folks up and dance. This peppy track will not disappoint if you enjoy shaking your booty.

This is from the film Street Dancer 3D, starring Shraddha Kapoor and Varun Dhawan. It features Varun Dhawan and Sonam Bajwa and is a remix of Jasmine Sandlas’ 2018 song Sip Sip. That was a great hit Bollywood Hindi song, and so is this.

Sauda Khara Khara was released by the multi-starrer movie Good Newwz, which followed the trend of reproducing 90s-old treasures for the film. It’s a re-enactment of Sukhbir’s blockbuster song. The song stars Akshay Kumar, Diljit Dosanjh, Sukhbir Singh, and Kiara Advani and is one of the film’s most popular new Bollywood songs.

It appears that remixes are the rage these days. This is a remix of the Punjabi singer Sunanda Sharma’s song. Jaani wrote the lyrics, while Tanishk Bagchi recreated the new Hindi song. If you liked the first one, we’re confident you’ll enjoy the new one as well.

This song from the Kartik Aaryan-Bhumi Pednekar-Ananya Panday film Pati, Patni Aur Woh is produced by Tanishk Bagchi and performed by Neha Kakkar and Tony Kakkar. The song contains a great hook step and upbeat sounds.

The complete star cast of the film — Akshay Kumar, Kareena Kapoor Khan, Diljit Dosanjh, and Kiara Advani – are included in this latest Bollywood song. The ladies appear to be too hot to handle, and we’re sure you’ll enjoy it.

The chart-topper is a remake of Bombay Rockers’ original smash Aari Aari Rock. By inserting a groove string of upbeats, the creators of this Hindi Bollywood song have continued to hold the soul of the original song. This upbeat dancing number will undoubtedly bring back many memories.

We’re sure you’re all familiar with Harrdy Sandhu’s song Naah Goriye, which featured him and Nora Fatehi. The new rendition, which stars Harrdy, Ayushmann Khurrana, and Sonam Bajwa, is just as fantastic as the original.

This calm, romantic tune is ideal for listening to when you’re missing your sweetheart during the night, or even better, dedicate this deep beautiful Hindi song to them and brighten their day!

Honey Singh’s original is already a huge hit, and this Bollywood song version is no less thrilling. The song is enticing and practically compels you to dance, and you can’t help but try a few moves out.

While we all enjoyed the powerful title tune from Chhapaak, Nok Jhok is a lovely melody that deserves to be heard.

This is a sweet song from Kangana Ranaut’s new film Panga. This latest Bollywood song, created by Shankar-Ehsan-Loy and written by Javed Akhtar, is brilliantly performed by Jassie Gill and Asees Kaur.

This song from Nawazuddin Siddiqui and Athiya Shetty’s Motichoor Chaknachoor is extremely sweet, including the principal actors’ nok jhok.

Tu Hi Yaar Mera, a lovey-dovey song starring Kartik Aaryan and Bhumi Pednekar, is another one we’re sure you’ll enjoy.

Even though the romantic action film starring Siddharth Malhotra and Tara Sutaria did not do well at the box office, this new Bollywood Hindi song has been at the top of the charts since its release. If you haven’t heard it yet, you should do so.

This wonderful Bollywood song from Bala will inspire you to live each day to the fullest. Trust us when we say this is a song you can listen to on repeat.

Do you want to dance all night? This new Bollywood song, which is a replica of a popular Punjabi song of the same name, is perfect for you. Strap it on and let your feet shake themselves onto the dance floor.

Divya Khosla, an actress and filmmaker, dances to Neha Kakkar’s song in this new Hindi single. This song, composed by Tanishk Bagchi, is one of the most popular Hindi songs in the Bollywood industry right now, and it’s a terrific addition to your latest Hindi playlist.