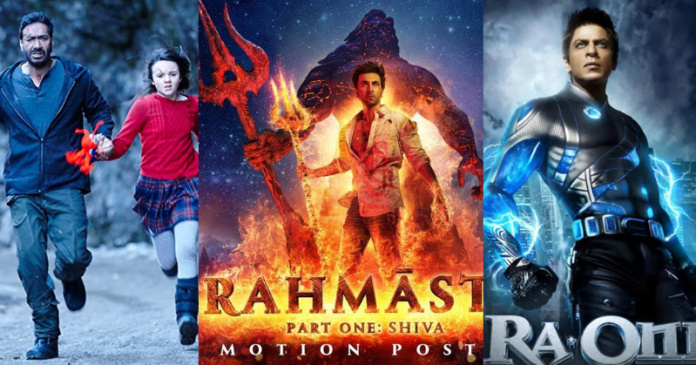 Visual effects (VFX) are an important element that makes a movie more visually appealing. The filmmakers with a vision have been able to make their audience experience it with the help of VFX. However, the technology hasn’t been used in Indian movies as extensively as in Hollywood, due to the expense one has to bear. But in recent years, there has been a significant increase in the use of VFX in Indian movies as the budget has increased.

The use of CGI and VFX is still new to the Indian movie industry but some filmmakers have mustered up the courage to move forward with it despite the risk and the challenges they might have to face. With the release of the trailer of the most anticipated movie with promising VFX, Brahmāstra has increased our expectations from the Indian movie industry.

Here we have listed some of the best VFX movies with awesome special effects in India:

The third installment in the ‘Krrish series’ by Rakesh Roshan was a visual treat to the crowd. The Krrish franchise movies became one of the highest grossing movies of all time as the crowd welcomed their own Indian superhero. A whopping budget was spent on the VFX and special effects of the movie. Despite the critical failure, it is one of the best VFX movies in Bollywood.

SS Rajamouli has always been a director with a vision. He always comes up with something unique and unexpected. His movies always manage to entertain and grasp the attention of the audience. The film ‘Magadheera’ is a must-add to the top 10 VFX movies in India. It has spectacular cinematography with jaw-dropping visual effects. It is a fantasy-revenge-drama and is considered one of the regional films that made it big.

Eega’s unexpected and different plot took everyone by surprise. The story revolves around the reincarnation of a man as a fly. S S Rajamouli once again proved that he is a visionary director. The film received huge crowd reception and critical acclaim. It is one of the best VFX movies of all time and it went on to become one of the biggest grosser of all time.

Shahrukh Khan’s ‘Fan’ was one of the most anticipated movies but its weak screenplay made the movie less promising. Despite being unsuccessful at the box office, Shahrukh Khan was immensely praised for his performances. The dedicated VFX team of the movies did incredible work on the screen which makes ‘Fan’ one of the best CGI movies in India.

Shahrukh Khan’s superhero movie ‘Ra One’ is one of the sci-fi thrillers that Bollywood offered us. Though the movie was supposed to be kids friendly, it failed to make a mark. Despite all the criticism, Ra One is among the best graphics movies in India.

The third installment in the ‘Dhoom series’ surprised everyone with its amazing VFX and graphics. With Aamir Khan in the lead, ‘Dhoom 3’ was appreciated for its action sequences and emotional quotient. It is one of the best action VFX in the action-thriller franchise.

Also Read: Best Movies of Aamir Khan That Proves He Is A Perfectionist

The Visual Effects of ‘Ethiran’ by S. Shankar is worth a mention. The movie displayed a lot of VFX. It has one of the best CGI in movies and some jaw-dropping robotic animatronics and stunning action sequences. The Indian audience was impressed by the epic climax of the movie.

Ajay Devgan’s action thriller ‘Shivaay’ started off with a kickass trailer that increased our expectations. Though the plot of the Bollywood movie was weak, the movie hit a benchmark in terms of VFX. You’ll see my point when you see the avalanche sequence in ‘Shivaay’. The film used VFX in perfect balance throughout the movie, but many of us failed to notice it. It deserves this spot as one of the best Indian VFX films.

The Baahubali series needs no introduction. One of the highest grossing Indian movies in the world, ‘Baahubali: The Begining’ was a milestone in Indian cinema history. This SS Rajamouli film is a visual masterpiece. This movie had a huge budget due to the stunning VFX work which was unlike anything that Indian cinema had witnessed before.

The most anticipated upcoming Indian Hindi-language fantasy adventure film Brahmāstra Part One: Shiva just released its trailer which has some promising VFX and BGM. The movie is based on mythology and promises something unique with its visual effects and graphics. It has been directed by Ayan Mukerji. It is produced under the banners Prime Focus, Dharma Productions, and Starlight Pictures, in association with Star Studios. Even before its release, it makes it to the top 10 VFX movies in India.

With an increase in the budget of the Indian films, the VFX is improving with time and looks more realistic. Let’s hope that the Indian film industry surprises us with more such visual masterpieces.