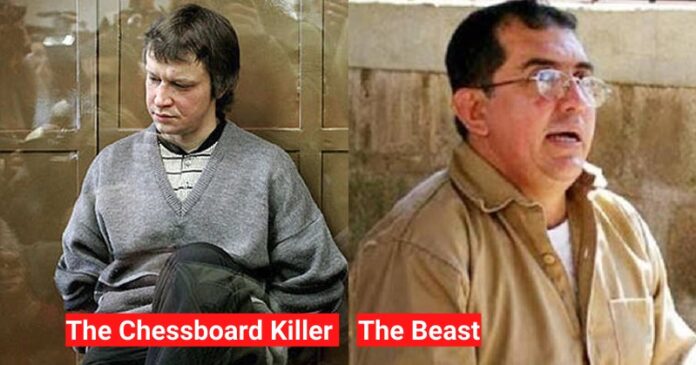 The world has known many serial killers who have committed inhumane crimes. The list of such people is endless. However, among them, there are some who have actually stolen the spotlight. The hideous crimes they committed against humanity. So, here we have made a list of those evil and notorious serial killers the world has ever known. Let’s begin:

Gaskins has claimed that by torturing and mutilating people, he has killed between 80 to 90 people. He started killing by picking up hitchhikers in 1969 on the coastal highways of the American South. Later, a criminal associate witnessed that he was killing two young men. So, he confessed to the police. Earlier, Gaskins was sentenced to the death sentence, but later it was turned to life imprisonment. However, he added another murder to his name later which led to him becoming the only man to have ever killed an inmate on death row.

Ted Bundy was not only an American serial killer, but he was also a kidnapper, rapist, and necrophile. As per his confession, he operated in various states in the USA and killed 30 women. Shockingly, he revisited crime scenes and indulged in sexual activities with the corpses. Bundy kept the heads of 12 victims as trophies in his apartment. In 1989, he died on Raiford electric chair. According to his defense attorney, “Ted, was the very definition of heartless evil.”

The Colombian is probably one of the world’s worst serial killers who is also dubbed by the media as the Le Bestia (The Beast). He confessed that he had sexually assaulted, tortured, and murdered 140 young boys. However, it is believed that the number might be around 300. After investigating, he was found guilty on 172 counts, which means, he should get imprisonment of 1,853 years and 9 days. But, Columbian law limits it to 40 years. For cooperation in finding victim’s bodies and good behavior, his sentence was further reduced to 22 years.

He was also known as the “Bitsa Park Maniac” and the “Chessboard Killer”. He lured homeless men to his house offering vodka and harshly killed them. He is believed to have killed 49 people. Most of them were killed with repeated hammer blows to their heads. And then he inserted a vodka bottle into the skull wound. Initially, he wanted to complete the number of squares on a chessboard by killing 64 people. It is also believed that he was in competition with Andrei Chikatilo, another Russian serial killer, who was convicted in 1992 for 53 killings. Surprisingly, it was the very same year Alexander started killing.

Cullen worked as a nurse in many hospitals. However, he always got fired for suspicious behavior from many of them. In New Jersey from 1984 to 2003, he confessed to murdering 40 elderly patients. He did this by poisoning his patients with unprescribed medication to death. According to him, he was relieving patients from their suffering just like an angel. He had around 400 victims and has been imprisoned for life.

Dennis Raider murdered 10 people in Wichita, Kansas between 1974 and 1991. He even sent letters to police taunting them under the name of BTK which stood for “Bind, Torture, Kill”. As per his technique, he first stalked his victims before breaking into their homes. After that, he binds their limbs and finally strangled them. He remerged in around 2004 after disappearing in 1988 when he sent a floppy disc to the press which helped in tracing him. Finally, he confessed his crimes, and now serving 10 consecutive life sentences.

Knowles used his charm into making victims, that is why he was also known as the “Casanova Killer”. He made victims believe him and later killed them. Allegedly, he killed 20 people, though it might be up to 35 lives. As far as victims are concerned, it can be anybody from men, women, and children. In 1974, the man from Florida was eventually killed by an FBI agent when he was trying to escape.

Aileen Wuornos’s story made Charlize Theron win an Academy Award. In the 2003 movie, “Monster”, she played the character of Aileen. Aileen killed seven men in Florida while working as a prostitute for their money and confessed to shooting them. She claimed that all of them had either attempted to sexually assault her or actually assaulted her. However, due to lethal injection, she died in 2002.

Gacy killed people between 1972 and 1978 in Chicago, Illinois. Reportedly, he sexually assaulted and murdered around 33 young and teenage boys. Before murdering them by strangulation using a tourniquet, Gacy would lure his victims with the promise of work or money to his home. He buried 26 of his victims in the crawl space under his house, four were discarded in the Des Plaines River, and three others were buried elsewhere on his property. Gacy was convicted of 33 murders and was sentenced to death. Due to lethal injection, he died on May 10, 1994.

For the murder of at least 71 people, Pedro was arrested in 1973 and later convicted in 2003. He was then sentenced to 128 years imprisonment. At the young age of 14, he killed the first person in revenge for his girlfriend’s killing. While he was imprisoned, he wreaked havoc on local drug dealers. He even executed his own father in prison who was also serving time for murder. He killed at least 47 inmates while imprisoned. Resulting, his sentence increased to 400 years for continued killings. Rodrigues was imprisoned for further crimes within the prison. Later, he was released in 2018.