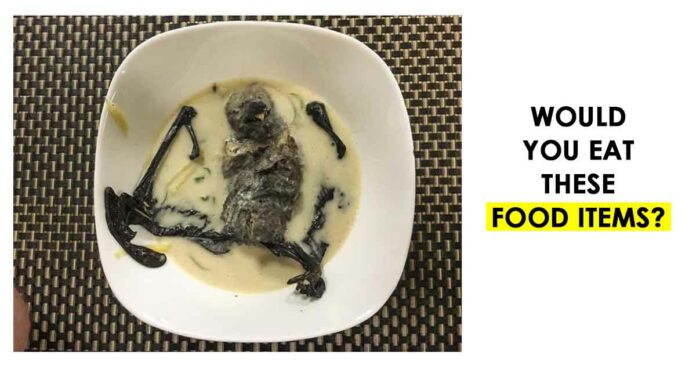 But amidst these very best, some people take their diet to extreme heights. They have an exceptionally strong stomach and even more exceptional taste palate. Let’s go ahead and explore the weird side of the food world-

Uttering the word ‘tarantula’ itself is enough to send you racing for your dear life and adding the adjective crispy before it doesn’t help either. But there are people around the world who love to crunch on the crispiness of this absolute nightmare.

The Cambodians thoroughly enjoy this crispy meal, and they prefer it deep-fried. Great choice! Hehe.

Don’t you think it would be an odd feeling to be stared at by your dinner? Food lovers in Japan take great pleasure in eating Tuna eyeballs. After watching them enjoy their dish, it would seem like it doesn’t taste as nasty as it might sound.

They taste sweet. I guess that’s about enough to make the meal favourable, edible and tasty, even though Shirako lovers are gutting down the sperm sacs of fishes like pufferfish and angler fish!

The idea of ants floating in a soup bowl doesn’t sound appetising, by any means. Well, it turns out that people in Laos do an excellent job at preparing a superb tasting soup out of ant eggs mixed with the partial embryos from white ants. They often add the mixture of baby ants, for added flavour.

Nose? Foodies in Canada love to savour a nice nose meal. The recipe involves Moose Snout or the Nose, boiled to a temperature to remove the hairs; then it is again cooked with onions and a generous amount of spices. After it boils, a broth is layered on it that gives the meal a jelly-like consistency.

Tastes great and has many health benefits, and the main ingredient happens to be dog meat. Umm… Let’s just leave it at that.

Not the usual crackers you find at your nearby grocery stores, huh? Munchy Crunchy Crackers with wasps in it is something that Japan loves to eat. They say wasps have a high amount of protein. But hello, even paneer, chicken, tofu has that! Why resort to wasps for your protein needs. So, good luck if you are planning to enjoy these crackers because you will have an adventurous diet.

You’re in for a teary cooking session if you intend to make a meal out of these bugs. It shouldn’t bother you as much if you’ve chopped onions daily. If you are wondering why do they eat this insect, note that they say it gives out an apple-like flavour.

Shout out to all ‘The Simpsons’ fan. This meal is deadly if not prepared the right way. Hence, only certified and experienced chefs are allowed to lay hands on the pufferfish, which makes the dish.

Crocodile meat lovers will tell you that it tastes like chicken with a hint of crab. But imagine the scene when you see a giant lizard in your dining place! Even if it’s dead, it looks deadly.

The beating heart of a cobra is ruthlessly extracted and popped into a glass filled to the brim with the cobra’s blood. Rather heartless. We can’t even imagine doing this, but people enjoy this as a delicacy.

The wriggling maggots are rather notorious for hopping around while being eaten. What else do you expect when one’s eaten alive? These maggots help enhance the taste of the cheese they say.

This one’s a developing duck embryo boiled alive in its shell. Sounds horrible, and looks just as horrifying. But nothing can stop a daring soul armed with an equally daring appetite.

Ready for a rattling dining experience? It’s deep-friend and tastes like frog legs. I guess you’ll have to eat frog legs to get the reference. But anyways, either of them seems out of our imagination for now.

You might say, “It’s just fish; what’s the big deal?”
Well, the deal is that this particular fish is served on your platter fried, but well alive and gasping for breath!

They could have spared at least the domestic animals, aye?

The feet of cows in this stew might be a little off-putting. But, hold on, what’s more off-putting is the hollow skulls of the slaughtered cows beheaded for the sake of a risqué platter.

Fried with a generous yet balanced mixture of salt, pepper powder and chilli. It’s crunchy, of course, with a delightful burst of grasshopper juices from time to time. Not sure if delightful is the right word to describe the experience.

If you adore the smell of sulphur, go ahead and try this Chinese delicacy. The century egg takes months of being buried under clay, salt and ash before serving it in its dark green glory! At least you can say you’re eating your greens.

So, there you go, twenty weird foods from around the world, after reading about it you’d either want to eat these or cleanse your soul with holy water. Go ahead!

9 Types Of Pasta You Didn’t Know Existed Before

7 Benefits Of A Vegan Diet You Didn’t Know About