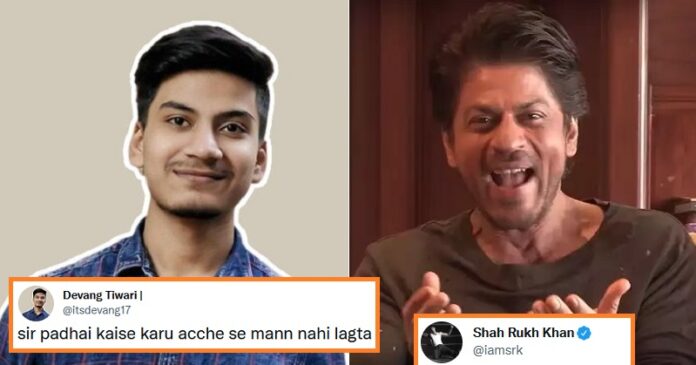 Shah Rukh Khan is the Badshah of Bollywood, King Khan can rule any heart with his charming personality and talent. He is admired for his friendly attitude towards his fans and also for his wit and humor.

The Bollywood king seemed to be on hiatus as he was missing from the big screen and social media for a long time. He was back in the limelight after he made the big announcement of his forthcoming film ‘Pathaan‘ and shared the date of release and teaser on Wednesday. The fans went bonkers after his latest declaration.

Releasing in Hindi, Tamil and Telugu.

Celebrate #Pathaan with #YRF50 only at a big screen near you. @deepikapadukone |@TheJohnAbraham | #SiddharthAnand | @yrf pic.twitter.com/dm30yLDfF7

Shah Rukh Khan had been maintaining a low profile on social media after his son Aryan Khan was arrested in a drug case. SRK will make comeback with Siddharth Anand’s Pathaan which also stars Deepika Padukone and John Abraham after ‘Zero’.

So much love for the announcement. Thank u @yrf #SidAnand #Adi @TheJohnAbraham @deepikapadukone for making me look good. And to thank u all lets do #AskSRK for 10 mins

This time he not only made the announcement of his upcoming film and comeback on Twitter but he also hosted an #AskSRK session to interact with his fans. The fans started pouring questions as they were taken aback and super excited for the #AskSRK session.

Like every other time, the superstar left us in splits with his witty replies. From promoting a beverage brand to speaking about Aamir Khan’s Laal Singh Chaddha.

Check out SRK’s wittiest replies during his latest interaction with fans:

I look the same only since 32 years now….ha ha. What look…it’s the same my handsome self… https://t.co/Zm0toeAEq6

Except for a brief while in 1993’s Pehla Nasha, Aamir and Shah Rukh Khan never really shared screen space together.

Here are some more Tweets from the #AskSRK session:

One of SRK’s replies also hinted at his next announcement and increased the anticipation of his fans. Check out his reply on the post where his fans are holding a placard that reads, “Thank you for announcement. Team SRK Warriors.”

If I knew you were coming home would have told you personally…thank you being there. My love to you. Keep the placard safely for the next few announcements. #Pathaan https://t.co/q0Xi0IIqKf

Can’t wait for the next big announcement! Stay tuned for more updates.