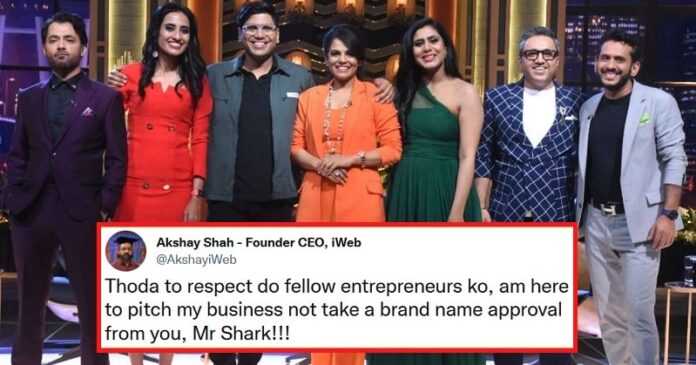 Despite its immense popularity with professional entrepreneurs, Shark Tank India is, after all, a reality show. We may like what we see on TV as it is specially designed for us. However, what happens behind the scenes can be a completely different story.

A good example is Akshay Shah, an entrepreneur who attended a show and pitched a product to sharks. But his experience was not what people assumed.

The Channel will try to make your pitch as simple as possible and in chaste Hindi for the viewers to Understand. Multiple rehearsals will be done for 2 days till late nights till the Channel is sure you are good to go and some guys are given more practice and attention from the

Shah also explains how the channel introduces contestants for the judges to invest money in.

taken up last on both the days and for not more than 10 mins with no focus given to us so we thought we are really good so the channel is not worried on us and our pitch which was totally wrong in hindsight.

Shah also tears into the judges who do not understand the pitch and come up with pointless answers. For example, Shah claimed that Ashneer Glover said about his rise.

So when we said we have 700k students with us, his exact was “Data to Kilo ke Bhaav main Chandni Chowk pe bikta hai!!” My reply to Mr Grover is, sir, this is not a name place animal thing data like you might be capturing in BharatPe to show GMV and gain valuation & funding.

Shah also said that he tried to make his point in Hindi as the show did allow the use of English language. This is what he got.

Shah opens up about Ashneer Grover.

I want to point #ashneergrover financials to him at this point in time, 256 crores sunk in vs 6 crores revenue alive on investors and cashbags, Need I say more??

Other Comments By Shah

space. Why do we waste one Shark’s seat due to some tech incapability, right?

Aman Gupta was not satisfied with Shah’s company name and logo and caught to that single line of argument.

our Less code tech name ‘Agilewiz’ all was a big big problem. So my reply to Aman is, Sirjee! yeh koi USB headset nai, that aasani se samaj aa jayega, thoda vakt lagega this is hightech 🙂

Shah additionally claims that Peyush Bansal absolutely couldn’t agree that the product may want to scale up because his own students’ discovery platform had poorly tanked.

although i retorted back to him that sir, we are not a college discovery platform, we have over 250 modules and we digitize processes of a university end to end and its workflow, we are an enterprise app on a B2B2C revenue model but sir had made up his mind

Anupam Mittal also did not seem pleased by hearing Shah speaking in Gujrati, which is his native language.

I’ve said it before. The right name for the show is Shark Tank Hindi, not Shark Tank India. @sharktankindia https://t.co/DDIriTMx1J

This Is very brave yet a humble request. After binge watching shark tank over the weekend I also feel the same. Way to go @AkshayiWeb . #SharkTankIndia https://t.co/cgzCR2bfiJ

Very important thread on a show that made me sick to my stomach with the amount of arrogance and attitude on display. It’s amazing how we don’t seem to demand humility and compassion from successful entrepreneurs. Culture is more important than most things in organisations https://t.co/5EyrvL61cz

What I love about Sharktank India is the array of cool businesses that the people of our country have learnt of. But I’m actually not surprised about what happens in the backend, reading this thread. I felt some of the sharks were either way too arrogant, or lacked knowledge. https://t.co/sq0WpfrRRm

Worth reading your thread. I just started watching old episode this weekend. Who the f**k are these 4-5 guys to decide your business model will perform better or not. Most of the time i felt this #SharkTankIndia is a joke like one pre-recorded film script 😂 https://t.co/d5LoZTryCr

Please go through this thread to understand the realities of the particular show and how the supposed business minds interact with fellow entrepreneurs. An eye opener.@HeyNikhila https://t.co/gymkDb3lHJ

Conclusion: Not everything we see is the truth. So, before knowing what happens behind the scenes, we should not judge anything. The judges have yet not replied to these tweets of allegations.