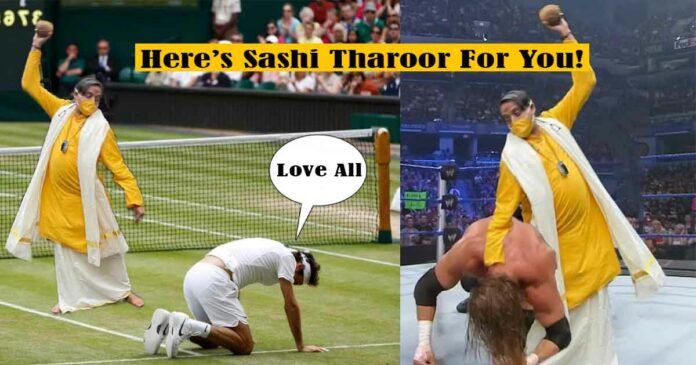 Thiruvananthapuram MP and senior Congress leader, Shashi Tharoor shared a picture on Twitter in which he was seen smashing a coconut at a temple on the festive occasion of Onam. It went viral within no time over this week and served as the latest meme fodder for social media users.

Shashi Tharoor had shared pictures from his Onam celebrations in a post on Twitter on Saturday. He was dressed in white mundu and yellow kurta. In one of the images, he was spotted smashing a ritual coconut at a temple in Kerala. This particular picture of Shashi Tharoor delighted the internet the most. Netizens photoshopped the leader into several scenarios to create hilarious memes.

Take a look at Shashi Tharoor’s post in which he is smashing a ritual coconut:

And then offered a “Niramala” at the Elevanchery Bhagavathy Kshetram a few minutes from my ancestral home (where I also smashed a ritual coconut & prayed to the Naga gods worshipped by all Nairs). #Onam blessings to all especially those suffering in these troubled times. pic.twitter.com/2rJuKVPEHl

After this post, netizens could not stop sharing memes. Interestingly, Shashi Tharoor took it sportingly and even shared some of them on his timeline. The one that he found the most hilarious, shared on Twitter and captioned, “There are many of these memes going around using the pic of me ritually smashing a coconut. I don’t know who dreams them up but they are often very funny. This one is one of my favorites.”

Check out the post of Shashi Tharoor while he shared some of his favorite memes:

There are many of these memes going around using the pic of me ritually smashing a coconut. I don’t know who dreams them up by they are often very funny. This one is one of my favourites: pic.twitter.com/yGk0LWz1TR

And this one too!!

People are going gaga about this coconut-smashing image of Shashi Tharoor. So, let’s check out some other hilarious memes as well that were shared by the netizens.

Credits to the editor for showing @ShashiTharoor a powerful muscular man. pic.twitter.com/k2ACadTmg7

While making and sharing memes, people also applauded Shashi Tharoor for his cheerful approach towards his memes. Look what they are saying about his attitude towards these memes:

i love the way how he takes all funny memes/comments,love his nature.others politicians can learn from him.

He isn’t someone who would mind a laugh or two!

He also shared a million-dollar video to wish everyone on Onam. The politician can be seen celebrating the festival in the video he posted on Twitter. Shashi Tharoor can be seen enjoying the swing tradition in the most traditional way, which is also known as Onam Oonjaal. The Congress leader can be seen dressed in a white mundu and a red kurta in the 30-second video. He can be seen enjoying the swing tradition with a bright smile on his face. At his ancestral home in Palakkad, he was celebrating Onam. Even though this tradition is usually left to the young girls, he was persuaded by his family to get into the “spirit of things”.

He shared the video on Twitter and wrote, “There’s an Onam swing tradition that one normally leaves to young girls. I was persuaded to get into the spirit of things this year. Happy Onam (sic).”

There’s an Onam swing tradition that one normally leaves to young girls. I was persuaded to get Into the spirit of things this year. Happy Onam! pic.twitter.com/Z23nJ9Fmfp

On the occasion of Onam, Twitter users took to the comments section to wish Shashi Tharoor. One Twitterati wrote, “Good Morning Sir. Swinging is So much fun !! Used to indulge a lot in my childhood. Haven’t swung from so long (sic).”

Check out some of the amazing comments below:

Good Morning Sir. ☕️🌹Nostalgia !!Swinging is So much fun !! Used to indulge a lot in my childhood. Haven’t swung from so long !! 😒😔

Really swinging happens to be part every girl’s childhood frolick…Now metropolis life has stuck up us all in high rises,where swinging seems to be a distant dream only.🙂#ChildhoodNostalgia

It’s good to see how a person with the biggest English vocabulary celebrating his culture in it’s purest flavour, with no modification and modernisation.

Onam is a harvest festival and marks the first month of the Malayalam calendar known as Chingam. It is celebrated in Kerala and it continues even after 10 days of the festival.