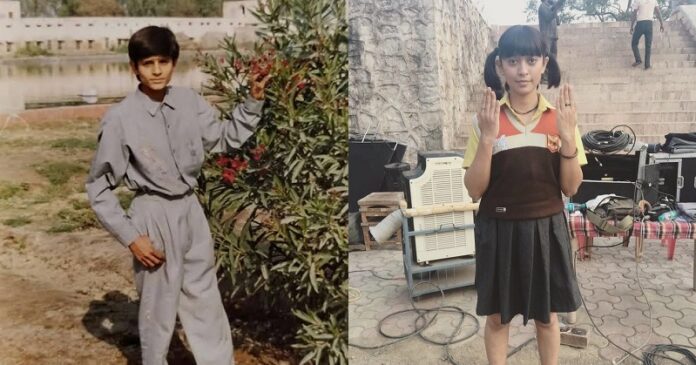 Who doesn’t like a good throwback picture every once in a while? And if the throwbacks are of our most loved celebrities, it’s just a treat for our day. So let’s sit back and go down the memory lane of the early years of the following actors.

A brilliant television and film actor, Vikrant is a showstopper on the screen. While recent shows like “Mirzapur” and Tapsee Pannu leading “Haseen Dilruba” have earned him an exceptional resume, his claim to fame was the widely successful Colors TV show, “Balika Vadhu” back in 2009.

One of the more popular artists to gain widespread popularity in the past few years thanks to his ultra-famous role in “Mirzapur”, Pankaj Tripathi’s breakthrough role came in the year 2012 for his antagonistic role in “Gangs of Wasseypur”. He is an alumnus of the famous “National School of Drama”, like his senior colleague Nawazuddin Siddiqui.

The breakthrough actor of the movie, “Gully Boy”, Siddhant is forging an excellent path for himself. An alumni of the “Narsee Monjee College” in Mumbai, he initially wanted to be a Chartered Accountant (CA). During his CA article ship, he started to audition for various roles.

A popular face and a master of art-house cinema, he has worked in many successful movies and T.V. shows like “English Vinglish” , “The Life of Pie” and “Jasoos Vijay” . During the initial years of his career, he was a part of a local stand-up comedy group “Bhayamama Group” where he mimicked popular artists of Bollywood.

Anushka Sharma is quite easily one of the most popular actors of today’s generation. With major hits like “P.K, Sultan”, or “Jab Tak Hai Jaan”, she has become a household name in India. Daughter of an army officer, Anushka initially wanted to pursue modeling or journalism. She walked in major shows like the “Lakme Fashion Week”.

Tapsee Pannu is a well-established actress in Bollywood as well as South Cinema. Her most noticeable act to date is her role in “Pink”, which got her critical acclaim and commercial gain. Tapsee is a software engineer and only got interested in modeling while she participated in the “Channel V show”, “Get Gorgeous”. She was widely successful during her initial modeling career and modeled for brands like “Coca-Cola”, “PVR Cinemas”, and “Airtel”.

Tabassum Fatima Hashmi, popularly known by her stage name Tabu is one of the most esteemed actresses of Bollywood. She is famous for portraying complex roles in movies like “The Life Of Pie”, “The Namesake”, or “Haider”. While it is believed that her first role was in the Telugu film, “Coolie No. 1”. She had debuted in the 1982 film “Bazaar” in an uncredited role at the age of 11.

The Miss Universe 1994 pageant winner is a popular name in India. She has worked in commercially super successful films like “Biwi No. 1”, “Maine Pyar Kyun Kia”, and perhaps her most iconic role came in “Mai Hoon Na”. Before stepping into the pageant world Sushmita wanted to pursue journalism. She is the first Indian woman to win the Miss Universe title.

With a career that spans a variety of occupations, Ayushmann Khurrana has certainly earned his stardom. He has worked as an actor, singer, television host, and RJ. He is known for the portrayals of the everyday man and has had major success in this genre for example – “Badhaai Ho”, “Dream Girl”, “Bala”, or his latest development “Gulabo Sitabo”. Ayushmann has degrees in both English literature and Mass Communication and was a founding member of theatre groups like DAV ‘s “Aaghaaz”.

The prominent star has several films to her credit – “Fan”, “Jolly LLB 2”, or “Article 15” to name a few. She is an alum of the “Film and Television Institute of India”.

Being born into one of the most respected names in the Bollywood industry, it seems like Abhay Deol got influenced by his family’s occupation from a young age. He made his debut with the 2005 film – “Socha Na Tha” and has since had a lucrative career with hits like “Aisha” and “Zindagi Na Milegi Dobara”. He is born into a Jat Sikh family and has done theatre since he was 18.

A pageant queen as well as an actor, Sobhita placed second in the Miss India pageant and represented India in the Miss Earth pageant in 2013. She is a trained classical dancer in Bharatanatyam and Kuchupudi and credits her dancer background for her expressions on stage.

Ali Fazal made his Bollywood debut with a cameo in “3 Idiots”. His mainstream success came in 2013 with the movie – “Fukrey”. Ali claims to have found his passion for acting while participating in his school plays at “The Doon School”, Uttarakhand.

Kumar belongs to a class of actors who have found their success in the new age world of social media web series. His prominent role came in the Ayushmann Khurana staring – “Shubh Mangal Zyada Saavdhan”. A graduate of the prestigious “IIT Kharagpur”, he was an active participant in a number of the college’s plays.

Yet another star on the list who found mainstream success through the ground-breaking hit – “Mirzapur”. She is also a popular commercial model having worked with brands like “McDonald’s”,” Tata Sky”, and” Vodafone”. She is a graduate of the reputed “National Institute of Fashion Technology” and has a degree in Fashion Communication.

With the help of just the above line, our next star in the list needs no introduction. His 2015 movie “Masaan” earned him critical acclaim, however, it was in 2018, due to films like “Sanju” and “Raazi” that he found stardom. Before working as an actor, to understand the industry properly, Vicky Kaushal worked as an Assistant Director to Anurag Kashyap, most notably in the “Gangs of Wasseypur” series.

The actor generally goes by just his first name – Divyenndu. He gained widespread popularity with his role of Nishant in “Pyaar Ka Punchnama”. His role of Munna Bhaiya in “Mirzapur” made him an overnight sensation. After his graduation, he cinema three years of theatre experience in Delhi and then went on to hone his skills in the “Film and Television Institute of India”

Fahadh Faasil gained his popularity by predominantly working in the Malayalam industry. He is a recipient of the prestigious National Film Award and has broken numerous Malayalam industry records. After the failure of his debut movie, Fahad went to the U.S for some years to complete his education and made a successful return to the big screens with his movie – “Kerala Café”.

Manav became a household name with his role in the widely successful television show –”Kyunki Saas Bhi Kabhi Bahu Thi” in 2007. He has since then gone on the star in several movies like – “Udta Punjab”, “Phillauri”, and “Naam Shabana”. Manav was a doctor before changing his profession and making his debut in 2002 with a biopic about Bhagat Singh.

Radhika Apte is known to be one of the most versatile actors of her generation having worked in Hindi, Tamil, Marathi, Telugu, Malayalam, Bengali, and English-language films. During her younger years, she trained in Kathak under Rohini Bhate and from then on, set her mind on theatre. During a break in her career, Radhika went to study in London for a year in contemporary dance at “Trinity Laban Conservatoire of Music and Dance”.

Rajkumar Rao is a brilliant entertainer who has won several awards ranging from Filmfare Awards to the prestigious National Award since his debut. Like several others on the list, he is also a graduate of the “Film and Television Institute of India”. During the formative years of his career, Rajkumar worked in theatre plays in Delhi while pursuing his graduation from D.U. He has stated that the turning point for his ambitions, was being inspired by Manoj Bajayee and wanting to crave a similar path for himself.

Jaideep Ahlawat is a prolific actor. His breakout antagonist role in “Khatta Meetha” was critically acclaimed. He has since worked in hits like “Raees” and “Baaghi 3”. Jaideep Ahlawat is a “Film and Television Institute of India” alumni and was the batch-mate of Rajkumar Rao.

Vineet Kumar’s big break in Bollywood was his brilliant portrayal of an aspiration boxer in the movie “Mukkabaaz” in 2018. Before making his leading actor debut, his noticeable works were “Ugly” and “Gangs of Wasseypur”. Kumar landed his debut movie “Pitaah” by participating in Superstars Talent Hunt in Mumbai. He later won the competition and Mahesh Manjrekar gave him his first movie.