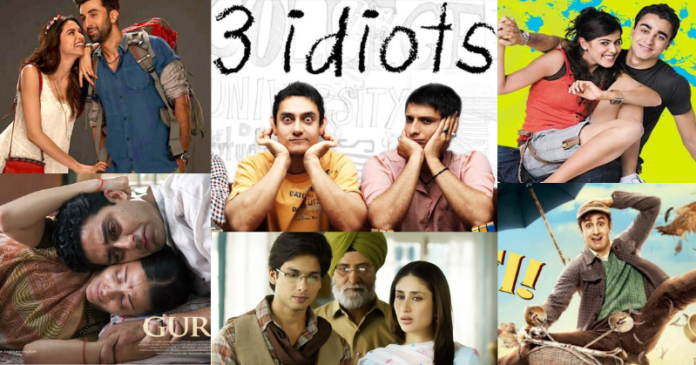 Movies are the solace to our tired souls. They give us a sense of comfort, companionship, and lesson. Bollywood movies bring so much more than that. They offer all these things but give more light humor, dance, and songs. There are a plethora of genres in Bollywood like, romance, comedy, horror, thriller, biography, and so much more. Some are made to entertain us while others are made to educate us. Since the arrival of OTT platforms, many of these must-watch movies are available there. So, let’s dive right into it,

Here is the list of 20 Bollywood movies that you can see on Netflix now,

Dear Zindagi features the top artists of Bollywood, Shah Rukh Khan, and Alia Bhatt. Kiara has many childhood traumas that affect her personal and professional life. By happenstance, she meets Dr. Jehangir, a psychologist who makes her feel safe and comfortable with her past. This movie was an eye-opener for a lot of people who weren’t aware of childhood traumas and how they affect us.

Arjun, Kabir, and Imran, three close friends, reconnect for a three-week road journey in the film. They fly to Spain, where they encounter Laila, who falls in love with Arjun and encourages him in conquering his work compulsion. Imran wants to meet his birth father, an artist, and Kabir and his fiancée Natasha have severe problems. Each friend picks a violent sport for the group to participate in on their trip. A female version of the movie is in the works. This movie is one of the best Bollywood comedy movies.

Rani is a naïve, young girl who is set to marry Vijay but he calls off the wedding before the ceremony. This leaves Rani heartbroken so she decides to go on her honeymoon to Paris on her own. There, she faces a lot of challenges but does not give up and lives her life as she pleases. She makes a lot of friends, goes to parties, wins a cooking show-off, etc. When she returns to her home, she looks more confident and powerful than ever. This is such a feel-good movie which you shouldn’t miss.

Rich Rahul gets rejected by his father upon marrying a poor woman and comes to London to start a new life. Years later, his older brother Rohan sets out on a journey to reconcile the family by bringing Rahul back home. This is also one of the Bollywood movies with a romantic plot.

Om Prakash, a young Bollywood actor, aspires to be a great star and is smitten by popular actress Shantipriya. Shanti is engaged to film producer Mukesh Mehra and is already expecting a child with him. Om’s hopes of reuniting with Shanti are dashed, but he is obliged to save her when Mukesh traps her in a strangled position, killing both of them. Om gets reborn as a Bollywood star 30 years later. Om meets Mukesh and they decide to make the film ‘Om Shanti Om’ together. Om will be reunited with his dear Shanti here, and he will begin to restore his memory, which will push him to explore, putting his life in jeopardy once more.

Arjun and Rahul are brothers who often quarrel due to a misunderstanding from the past. They come home to see their 90 years old grandfather. They uncover their dad’s affair and Rahul being gay. Tia likes Arjun but kissed Rahul while drunk. All these cause a rift in the family but they are united again. Kapoor & Sons is a terrific family drama that takes you on an emotional journey. It’s a tearjerker, but it also depicts the complexities of middle-class existence.

Ishaan is transferred to a boarding school after his parents criticize him for his low academic performance. However, Ram, an art teacher, recognizes his dyslexia and assists him in realizing his full potential. Ram identifies his talent for art and guides him to win an art competition in the end. Taare Zameen Par is one of the best Bollywood movies ever made.

Aditya, a distraught tycoon on the edge of suicide, boards a train aimlessly. He meets Geet, a free-spirited girl who is planning an elopement with her boyfriend and is drawn into her chaotic world.

Pink is a fantastic Hindi film available on Netflix that explores the patriarchal aspect of Indian society, which is quick to condemn girls at every turn. The film is made excellent by Amitabh Bachchan’s outstanding portrayal as a retired lawyer who returns to practice to save three young girls who are accused of a crime. This is one to watch if you enjoy a good crime drama as it is one of the Bollywood movies with the best plot.

PK is a humorous and heartwarming story. The plot centers around an alien who has arrived on Earth but has misplaced his clothes as well as the only means of communication with his spaceship. Amir Khan plays an alien who is having trouble adjusting to life on Earth. The film deals with a variety of societal norms and religious beliefs.

Yeh Jawaani Hai Deewani, another cult masterpiece from Karan Johar’s brilliance, is another cult favourite. Bunny, a free-spirited travel enthusiast, has a coming-of-age story in Yeh Jawani Hai Deewani. The film starts with a bunch of friends having fun on vacation. Everyone soon moves on with their lives, only to resurface years later. During this time, a lot of things have changed, and everyone has changed tremendously. This lovely film is the third Bollywood film to earn more than 300 crores globally.

This is a must-see Bollywood film on Netflix for thriller and mystery fans. The film is based on Roald Dahl’s short story, Lamb to the Slaughter. Even though the film was not well regarded by critics, it managed to stay on Netflix’s Top 10 list for several weeks. The film revolves around a police investigation of a murder.

The film Barfi tells the narrative of three people who fall in love and how their lives alter as a result of their choices. Burfi is the main character. This film will cause you to rethink society’s definitions of abnormal and normal behaviour. This film will make you laugh, weep, and entertain you to the fullest extent possible. This is one of the best Bollywood movies in the comedy genre.

The film follows Ved Vardhan Sahni (Ranbir) through three different stages of his life: as a nine-year-old child, a 19-year-old adolescent, and a 30-year-old adult. Tamasha will not fail to touch your heart if you enjoy love films thanks to A.R Rahman’s soundtrack and Irshad Kamil’s lyrics.

The plot centres on two buddies who are unsure if they love each other. And, to disprove the doubters, they vow to find romantic companions for one other. However, once they complete their objective, they gradually discover that they did love each other. The story is simple, but the one-liners are fantastic. If you adore Bollywood masala films, you will thoroughly enjoy this one.

Whether or not you believe in the story of Sanjay Dutt shown in this film, no one can dispute that it is entertaining to see. Sanjay Dutt is played by Ranbir Kapoor, who is fantastic. Ranbir has mastered everything in this portrayal, from Sanjay Dutt’s voice to his body language. The film is also extremely enjoyable. This is an excellent Hindi film to see if you like great individual performances.

The film is a remake of the Telugu film “Arjun Reddy”. The plot follows Kabir Singh, a surgeon who becomes emotionally unstable after his girlfriend Preeti leaves him. The film grossed over 379 crores at the box office.

Andhadhun would most likely win you over if you enjoy black comedy crime thriller films. The film is about a pianist named Akash who plays the piano while pretending to be blind. When he sees the murder of a former film actor, his life becomes engulfed in far too many issues.

The film is mainly based on the experiences of Reliance Industries founder Dhiru Bhai Ambani. Guru is not a biography, but it is heavily inspired by his life. It tells the story of a villager who arrived in Bombay in 1958 and climbed to become the country’s most powerful industries tycoon.

Three Idiots is one of the best Netflix movies, based on Chetan Bhagat’s most renowned novel, Five Point Someone. The film, directed by Rajkumar Hirani, depicts life in an engineering college. Rancho, the main character, is a witty rogue who has a unique answer to every challenge. After college, he mysteriously stopped communicating with everyone. Throughout the film, Raju and Farhaan, his two best friends whom he persuaded to believe differently, strive to locate him. This film has it all: drama, suspense, a compelling tale, and plenty of humor.

Here you go! Pick up your popcorn and find a cozy place to watch all of these amazing movies with your loved ones. Bollywood movies are a treat to watch with fantastic plots and music. So, don’t miss the chance to watch these great movies.