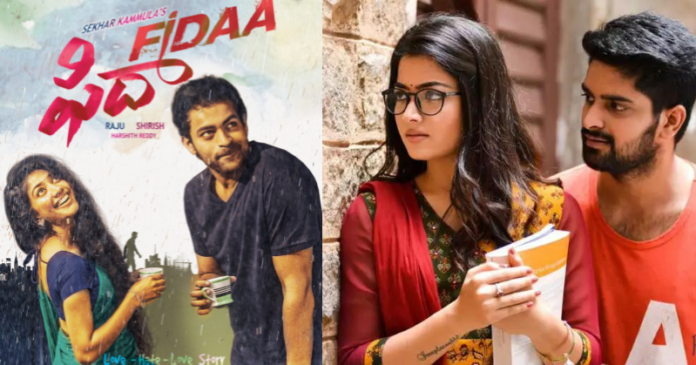 South Indian movies, especially Telugu romantic movies are blockbuster hits not only in their regional language but also when dubbed in Hindi. The Box Office earnings are huge and south Indian love story movie often surpass the Bollywood Romantic movies. The audience base of the south love story movie in Hindi is increasing day by day. A lot of movie channels and OTT platforms air and stream the dubbed versions of these romantic South Indian movies, which have a huge fan base. Love, romance, and romcoms is a genre that is loved by all.

We have curated the Top 30 South Indian Romantic movies list whose Hindi dubbed versions won many hearts, you can pick one and have fun watching:

The love story revolves around Anand, the hero meets the daughter of a rich woman Anasuya on a train ride and falls in love with her eventually. They have to fight for their love when they face some hindrance when they try to convince their families. It makes it to the Romantic South Indian movies list as the dubbed version of this south Indian love story was a huge hit and a must-watch for romantic movie lovers.

This movie was a blockbuster hit, the love story of Bindu and Nani where Nani is killed by the jealous Sudeep. In order to avenge his death, Nani is reincarnated as a fly. Bindu recognizes him and both of them seek revenge together. This south romantic movie is very popular for its unique and fun plot. It is a must addition to the south romantic movie list.

It is a love story of Bhanu, a village girl, and Varun, an NRI. They face several differences that complicate their relationship as they come from different backgrounds. It is a very popular south love story movie.

This South Indian romantic movie was a box office hit that earned est. ₹700 million with a budget of ₹200 million. A failed cricketer, Poorna becomes an alcoholic when he is left heartbroken by Anshu and is forced to marry his neighbor, but things change after his marriage.

Julayi is a romcom and action movie. Allu Arjun plays Ravi, a carefree guy and Ileana plays Madhu. The story revolves around a bank robbery and their love story. The plot consists of some interesting twists and turns which makes it to the south romantic movies list.

This South Indian Hindi movie was a blockbuster. The movie features Bantu, who is treated very harshly by his father, but when he comes to know about his real parents he becomes invested in making a mark in his new family. This romantic Hindi dubbed movie is a must-watch.

Chaitra and Sathyam meet each other unexpectedly and decide to lie to each other. They fall for each other eventually. The National Investigation Agency hires Sathyam to help catch a criminal Padmanabham whom he encounters. If you love romance amidst the action, this movie is just for you.

The story follows Ram who does not believe in long-lasting love and his way of thinking doesn’t match with his girlfriend, Jaanu, played by Genelia and they break up with each other. When a police officer, Abhishek asks him the reason he tells him about his former lover, Rooba. The chemistry between the lead actors in this one makes it one of the best South Indian love story movies.

The plot involves Bheesma who runs Bheesma Organics, things take a different turn when he falls for Chaitra who is an employee in Bheesma Organics. It makes it to the south love story movie list with its brilliant romantic plot.

The story revolves around the relationship between Varsha who is an introvert and Aditya who is an extrovert. They meet after many years after parting ways because Varsha was unable to share her feelings with him. It is one of the best films in the romantic genre.

The movie features the love story of a genius chef, Dev, who is also overweight, and Tara who is his colleague, but the dynamic changes when Maya enters the scene. You can watch this romantic movie with a unique plot on Zee5 Premium.

The story revolves around the love story of Hari and Shailu, where Hari searches for true love and gets disappointed every time until he meets Shailu. He soon realizes that Shailu was his childhood crush.

Two women Aishwarya and Catherine meet on a flight where they share their love stories with each other. Later, Catherine gets a feeling that the man she is about to marry resembles Aishwarya’s fiance. Besides romance, this south Indian movie also has an attention-grabbing thrilling plot.

To stop Bhoomi’s parents from searching for a groom, her friend Indu sets up her boyfriend Krishna to act as Bhoomi’s lover, but soon everything gets complicated when Bhoomi falls for Krishna.

The story revolves around Siddhu whose father wants him to marry a rich girl, but things go the other way when he falls in love with Hasini. This South Indian love story was a massive hit and a must-watch for rom-com lovers.

Known as ‘Race Gurram’ in the Telugu industry. The story of this south love story movie revolves around two brothers who are different from each other and like to do things their way become enemies of a thug and they try to stop the gangster at all costs. Shruti Hassan plays the love interest of Allu Arjun.

The movie features Satya, who suffers major burns for which he undergoes plastic surgery to change his face. But the new face gets him into trouble when he is released from the hospital, he soon has to face the murderer of his lover. The plot is attention-grabbing and the movie is a huge hit.

This movie also has a Hindi remake Kabir Singh, the movie gained popularity for the controversies for the plot but was a box office hit. The story revolves around a young surgeon suffering from alcoholism who has to deal with his temper and self-destructive issues when his girlfriend has to marry someone else. This often makes it to the best south romantic movies list.

The story revolves around Vicky and Priya. Vicky cancels his engagement with Priya who is his childhood friend when he comes to know about the compromises Priya made for his sake but later he understands the importance of compromises in a relationship.

Ajay, a brat proposes to Geeta and threatens her that he will jump off the roof if she refuses him. Later when she gets a proposal from Arya she refuses him even when she wants to accept him. That’s not the only twist!

Nandu tries to impress Akarsha’s Grandmother Shalini in order to woo her, when she finally starts liking him she finds out about Nandu’s Revenge Plan. The south love story movie also has a Hindi remake starring Shruti Hassan and Girish Kumar.

A young lecturer falls in love with an Independent woman, but it doesn’t work in his favor as he is misunderstood by the girl as a pervert. Things settle down later and they fall in love.

Miles of Love revolves around the story of a career-focused girl Neelambhari who falls for a  carefree guy, RamaChandraiah on a 9-hour journey from Hyderabad to Bangalore. You can watch this south Indian movie on several OTT platforms.

The story revolves around a man who falls in love with a woman who he meets after his heartbreak but things go wrong when he comes to know that she is already engaged.

Ajay saves Swapna from a factionist, Obul Reddy when Ajay goes to Kumool for a Kabaddi Match. He falls for her and decides to protect her from Reddy. Watch this south Indian love story movie on Amazon Prime Video.

Karthik who is an aspiring filmmaker falls for his neighbor Jessi, but her father is against their relationship because of religious differences as she is a Christian.

A visually impaired chef, Kalyan helps the woman he loves, Vennela, when he comes to know about her financial problems but the story has a hidden twist when he gets to know that she is hiding something.

The love story of Hari and Karthika faces several problems as they belong to different castes but they decide to fight for their love.

Prabha is interested to meet Nandini at a reunion party, who is his childhood friend but things go wrong when a gangster’s daughter, Nisha falls for him.

Siddhu is a failed entrepreneur, and Vennela, is an aspiring fashion designer, they cross paths and try to help each other achieve their dreams. They develop a bond and start falling in love eventually.