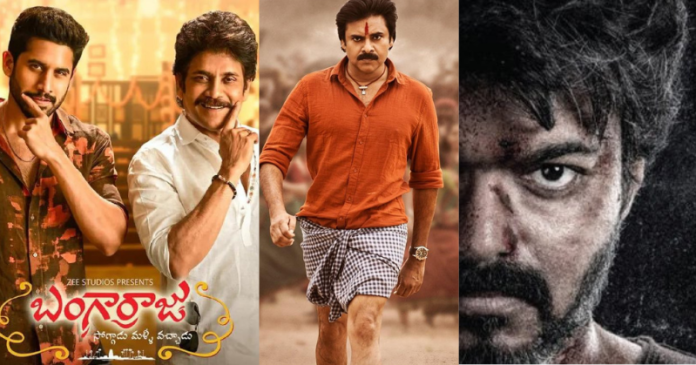 So, here we have listed the top 10 South Indian movies with the highest box office collection in 2022:

K.G.F: Chapter 2, the sequel of the south movie KGF Chapter 1 hit the theatres on 14th April 2022 in India. Apart from releasing in Kannada, the dubbed versions of the movie were also released on the same day. The movie went on to become the highest grossing Kannada film after its release and also became the new south movie to record the second-highest opening day in India. One of the new South Indian movies 2022 to create a box office collection of ₹1,169.71 crores by holding a position as the second highest grossing movie in India.

RRR is a high-budget film that was supposed to hit the theatres in 2020 but was delayed due to the ongoing pandemic. RRR is one of the latest south Indian movies 2022 that created a record at the south box office collection 2022, by becoming a blockbuster. The box office collection of one of the highest grossing South Indian movies which was released on 25th March 2022, is ₹1132 crores. The highest opening day record was also broken by RRR which earned about 240 crores on its first day. The new south movie 2022 became the second highest grossing movie in India. Presently at the third position.

When a shopping mall is hijacked by terrorists in Chennai a spy among the hostages, Veera Raghavan tries to save the other hostages from the terrorists. The new South Tamil movie made a huge mark at the box office. The movie stars Thalapathy Vijay, K. Selvaraghavan, Pooja Hegde, Shine Tom Chacko, etc. The movie made a record at the Kollywood box office collection 2022, by earning ₹220.35 crores.

A face-off between a righteous policeman, SI Bheemla Nayak, and an-ex havildar, Daniel Shekhar, when the havildar tricks Bheemla into giving in to corruption. One of the new South Indian movies 2022 has blessed us with, earned around ₹161–192.37 crores. The film is directed by Saagar K Chandra and stars Pawan Kalyan, Rana Daggubati, Nithya Menen, Samyuktha Menon.

Infamous palmist Vikramaditya finds love when he meets A young doctor Prerana, who gets diagnosed with a terminal disease and refuses to marry her partner. Their relationship with her partner, who is an infamous palmist Vikramaditya is threatened after this unfortunate turn of events. The new south movie was released on 11th March 2022 featuring Prabhas, Bhagyashree Patwardhan, Pooja Hegde, and Krishnamraju.

The latest South Indian film James made a huge earning on its opening day grossing around ₹32 crores, breaking the opening day record for any Kannada film. Within 4 days of release, the film grossed ₹100 crores becoming the second highest-grossing Kannada film at the time of release. Also became the fastest Kannada film to gross ₹100 crores at the box office but was soon surpassed by K.G.F: Chapter 2 within a month.

The Malayalam movie that made a mark at the south Indian box office in 2022 is Bheehma Parvam. The movie hit the theatre on 3 April 2022 and broke several box office records for a Malayalam film. On the fifth day of its release, it crossed the ₹50 crores mark. The film got mixed reviews from critics. Securing a place in the best south movies collection, the movie earned over ₹100 crores

The new South Indian movie, Acharya hit the theatres on 29th April 2022. The movie grossed around ₹80 crores, close to the 100 crores mark, but considering the budget of the film, it could have done better. Though the new south movie got mixed responses from critics, it made it to the list of the top 10 highest grossing South Indian films in 2022.