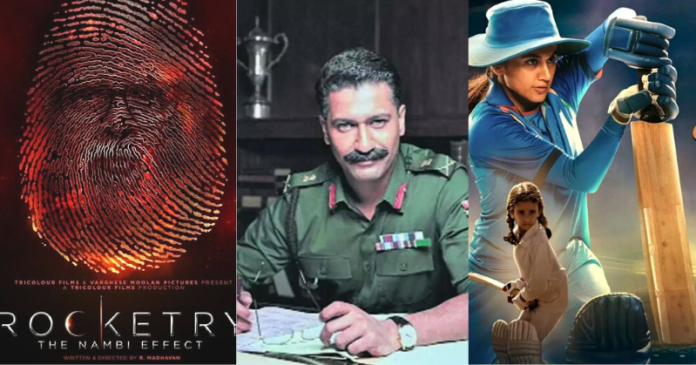 From biopics to crime and war stories, Bollywood has plenty of movies based on real life stories. Even though they are often modified to a certain extent for the sake of entertainment and good storytelling, however, the compelling story behind these Bollywood movies is the real life events. In 2022, we have some new Bollywood releases which are based on true stories.

Here’s a list of some of the best Bollywood movies based on true stories that you should not miss out on:

Among the upcoming Bollywood movies based on real life stories, this one is a sports biopic. After Mary Kom, this is supposed to be a Bollywood movie based on a female athlete. Shabaash Mitthu is the biopic of Mithila Raj, the current ODI and Test captain of the India women’s national cricket team. Produced under the banner of Viacom18 Studios and directed by Srijit Mukherji, the film stars Taapsee Pannu in the lead role. In the first look, she can be noticed donning the blue jersey.

The new movie, Major is directed by Sashi Kiran Tikka and produced under the banner of Sony Pictures India. This movie, based on true incidents, is a biographical action drama that showcases the journey of Major Sandeep Unnikrishnan, who served by saving people during the 26/11 Mumbai terror attacks. In the lead role, the film stars Telugu actor Adivi Sesh. It is one of the real story movies in Bollywood 2022.

Talking movies based on true incidents, we have this masterpiece based on a war hero, Sam Bahadur. The movie features Vicky Kaushal as Field Marshal Sam Manekshaw. After the superhit Raazi, this is his second war film with director Meghna Gulzar. Sam Manekshaw’s military career traversed four decades and through five wars. His military victory in the 1971 Indo-Pak war led to the formation of Bangladesh and he was the first-ever Indian Army officer to be promoted to the rank of Field Marshal.

Pippa is one of the upcoming Bollywood movies based on true stories 2022. It is a war film that stars Ishaan Khatter, Mrunal Thakur, and Priyanshu Painyuli. Directed by Raja Krishna Menon, the movie is co-produced by Ronnie Screwvala and Siddharth Roy Kapur. Ishaan Khatter will be seen in a never-seen-before avatar playing the role of war hero Brigadier Balram Singh Mehta. Pippa is based on the book The Burning Chaffees by Brigadier Mehta, which is about an Indian soldier who fought in the war against Pakistan in 1971.

Ajay Devgn plays the protagonist in Maidaan which is among the Bollywood movies based on true stories. The movie follows the life of coach Syed Abdul Rahim, who trained and led the Indian football team to win the Asian Games in 1951 and 1962. The new Bollywood movie revisits history and tells us the story of the golden era of Indian football. Directed by Amit Sharma, the film also features Keerthy Suresh. The movie was supposed to be released on 3 June 2022 but it is yet to be released due to some reason.

The upcoming Bollywood movie is based on the life of Nambi Narayanan, an aerospace engineer at the Indian Space Research Organisation and a former scientist. Rocketry: The Nambi Effect makes it on the list of movies based on true events. Madhavan plays the titular lead role in the movie and he has also written, produced, and directed the film. The story follows the life of the scientist who was wrongly accused of espionage, throughout his journey as a graduate student at Princeton University to his workdays at ISRO. The film shows his struggle for justice.

This new Bollywood release is based on king Prithviraj Chauhan who fought against Muhammad of Ghor. It is produced under the banner of Yash Raj Films and directed by Dr. Chandraprakash Dwivedi. Prithviraj features Akshay Kumar and introduces Manushi Chillar, who is making her Bollywood debut with this film. Sanjay Dutt and Sonu Sood also play pivotal roles in this historic action drama.

Ajay Devgn stars in this upcoming thriller film, which is also directed and produced by the actor. It is based on true events that grabbed headlines in 2015. The film, formerly titled Mayday, hangs around the 2015 Jet Airways Doha-Kochi flight, which faced trouble due to bad weather conditions and low visibility. The captain of the flight had to do a ‘blind’ landing on the runway without being able to see it with 150 passengers on board. However, he was demoted to the status of co-pilot after this incident. The movie also stars Amitabh Bachchan, Boman Irani, and Rakul Preet Singh.

So, these are a few upcoming and new Bollywood movies based on true stories. If you have any other new movies based on real-life stories on your mind, let us know in the comments section.