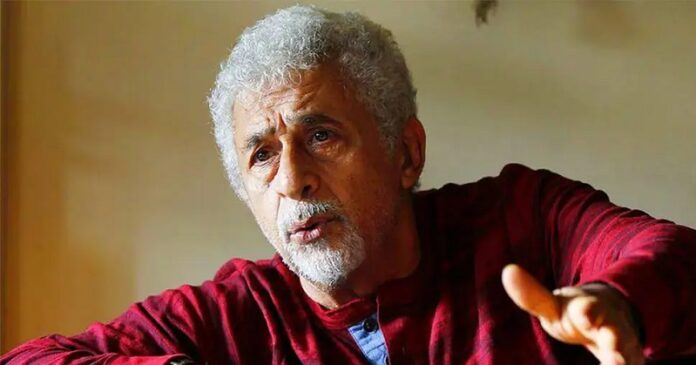 Vivek Agnihotri’s film ‘The Kashmir Files‘ has been the biggest Bollywood blockbuster of the year and still continues to be one of the highest-grossing Bollywood films. The movie was released in March with a low budget but unexpectedly broke the box office and collected Rs 252.90 crore in India.

The second highest-grossing Bollywood film of the year 2022 is Bhool Bhulaiyaa 2. The horror-comedy film is directed by Anees Bazmee starring Kartik Aaryan in the lead role. The box-office collection of the latest release touched Rs 163.15 crore so far and is expected to cross the Rs 175 crore mark soon.

The Kashmir Files still continue to attract controversies and criticism.

Naseeruddin Shah on The Kashmir Files

Recently in an interview with NDTV, the veteran actor Naseeruddin Shah was asked about his opinion on the blockbuster success of The Kashmir Files and superstars like Akshay Kumar doing films like Samrat Prithviraj.

Naseeruddin Shah reacted to its success and called it an “almost fictionalised” film. He said,

“They want to be on the winning side.” And went to call The Kashmir Files “an almost fictionalised version of the suffering of Kashmiri Hindus” and even stated that the “government is promoting it”.

Shah also went on to say that there will be a rise in the number of “pseudo-patriotic films” in India due to the success of films like The Kashmir Files.

Vivek Agnihotri didn’t spare a moment when he got to know about it and reacted to Naseeruddin Shah’s statement, by sharing a clip from the interview where the actor can be heard talking about the consequences of genocide and saying that when you talk about it “you get a slap on the wrist”.

By sharing the video, Vivek tweeted,

“I agree with this. You are indeed abused and penalised for talking about Kashmiri Hindu Genocide in your own country.”

I agree with this.
You are indeed abused and penalised for talking about Kashmiri Hindu Genocide in your own country. pic.twitter.com/sU4lePOfe0

Most people are unaware that The Kashmir Files is not the first film in Vivek Agnihotri’s political thriller franchise. The first film, The Tashkent Files actually starred Naseeruddin Shah in a prominent role.

In the interview, the veteran actor was also asked about the silence of the Bollywood superstars like Salman Khan, Shah Rukh Khan, and Aamir Khan.

“I cannot speak for them. I am not in the position they are in. I feel they think they would be risking too much. But then, I don’t know how they explain to their own conscience about it. But I think they are in a position where they have too much to lose.”

When asked about Shah Rukh Khan he even cited Aryan Khan’s drug case as an example and said,

“What happened to Shah Rukh Khan and the dignity with which he faced it was admirable. It was nothing but a witch-hunt. He has kept his mouth shut. All he did was support Trinamool and applaud Mamata Banerjee. Sonu Sood gets raided. Anyone who makes any statement gets a response. Maybe I am next. I don’t know. (laughs) Though they won’t find anything.”