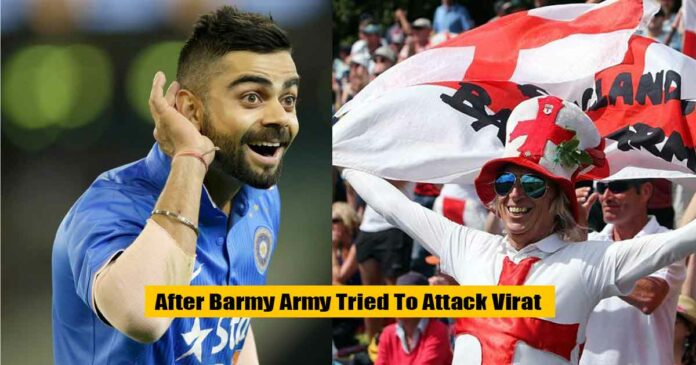 Even though there is still more than a week left at the start of the Test series against England, the action has already begun. Of course, not on the field but on social media. Barmy Army, a group of England cricket team’s supporters’ group ahead of the series, has taken it upon themselves to rile up the Indians. Perhaps that is why they started with their unnecessary comments on social media about Indian cricketers.

However, their recent post on Twitter taking a dig at Virat Kohli, the Indian skipper has backfired. Thanks to a fitting reply from former India opener Wasim Jaffer, they ended up becoming a laughing stock. The so-called Army or the England supporter’s group circulated an old picture of Kohli. In that picture, Virat Kohli had a bow and arrow in his hand and was aiming for the target. That picture also includes Jaffer, who is standing in the background. The Barmy Army captioned its post on the micro-blogging website Twitter, “BREAKING NEWS Virat is out of the upcoming Test series as he’s in Tokyo preparing for the Archery, More to follow. #Tokyo2020.”

Virat is out of the upcoming Test Series as he’s in Tokyo preparing for the Archery.

As soon as the photo was shared on social media, Jaffer came up with a savage reply and shut them down. He used an epic meme from the movie “Gangs of Wasseypur: Part 2” to give them a befitting reply. As usual, the fans were in complete awe of Jaffer’s sense of humor, who is known for his wit and humor. With the punch line – “Iske pass jo ganja hai woh humko chahiye” (I want the w*ed that he has), he trolled Barmy Army with his caption too as he wrote, “Barmy Army or Bar mein Army?” (Barmy Army or Army in Bar?) with laughing emoji.

Indian supporters can also be hilarious and they don’t shy away when it comes to memes and they never tend to leave any opportunity to participate in a meme fest. And this time was no different. Let’s check out how they reacted:

🚨
Breaking News : More than half of English team unavailable for test series against India as the players wished to represent their native countries in Olympics. 😉

Wants to know your location 👀 pic.twitter.com/Edm6gTQEU9

Barmy Army is quite famous for its tactics of playing mind games by taking jibes at the opposing teams on social media. If you don’t remember, earlier too, they wished the former Indian skipper MS Dhoni on his birthday by reminding him about the match which India lost to England in the ICC World Cup 2019.

Currently, the Indian cricket team led by Virat Kohli is in England in order to play a 5-match test series over there starting August 4th, 2021. Since both the teams are pretty strong, there’s no doubt that it’s going to be a tough contest. Also, England will certainly use the home advantage to the maximum.

India played a three-day warm-up game against County Select XI in Durham with a view to give a final shape to their preparations. However, due to minor niggles, skipper Kohli and his deputy Ajinkya Rahane missed the encounter. While Rahane missed the tie because of mild swelling around his left upper hamstring, Kohli had complained of some stiffness in his back. Fortunately, Kohli seems to have recovered, and Rahane is also expected to be fit before the series.

Apart from them, other Indian cricketers such as Shubman Gill, Avesh Khan, and Washington Sundar have also suffered injuries during their warm-up matches. Due to their injuries, Prithvi Shaw and Suryakumar Yadav will be joining the senior team in England soon who are presently in Sri Lanka. Due to the change in the quarantine rules, Jayant Yadav’s name was dropped.

On the other hand, after winning the ODI series by 2-1, the young Indian team that is led by Shikhar Dhawan played their first T20I of the 3-match series against Sri Lanka on 25th July 2021.