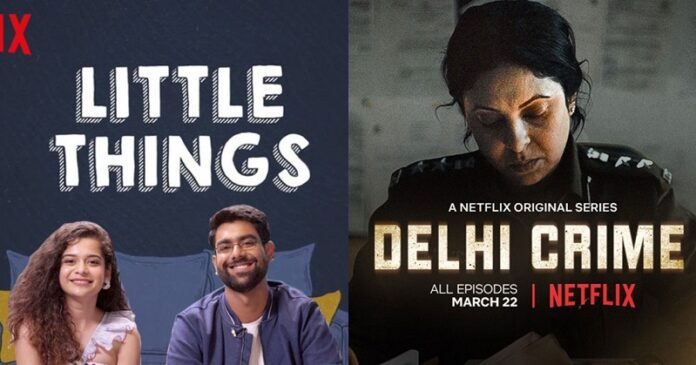 India has begun to dominate the OTT sector, with some of the top desi web series leading the way. Netflix has a growing collection of Indian television shows and films. When it comes to original material produced locally, streaming services are actively involved. This is due to the fact that video consumption in India has exploded to unprecedented levels.

The streaming services are actively uploading content for Indian users, and it is clear that India is watching a lot of content and actively engaging in its assessment. In India, the streaming platform is available in a variety of subscription packages, and you may choose the one that best suits your needs. On the massive streaming platform, there’s far too much to see. Even if you’re only seeking for Indian Hindi Netflix desi web series, you’ve come to the right place.

Here’s the list of the top 15 best Indian web series in Hindi with high ratings to watch on Netflix:

Delhi Crime is a riveting, realistic portrayal of one of history’s most terrible atrocities. With well-established personalities and outstanding performances, it succeeds in authentically capturing the city’s mood and haste. To date, this is the best desi web series in Hindi available on Netflix. Delhi Crime was created by Richie Mehta.

The story begins on the night of December 16th, when officers came across the male and female victims near the Mahipalpur flyover, and continues with the investigation, capturing the offenders, and nationwide demonstrations and pressure.

When it comes to crafting the main characters and effectively portraying them on-screen, Sacred Games shines brightly. Furthermore, while the show is easily binge-able, the storyline featured enough suspense and captivating scenes. Nonetheless, the plodding pacing and a few writing flaws may detract from your lofty hopes.

The plot of this Netflix desi web series in Hindi centers around a Mumbai terror strike masterminded by mobster Ganesh Gaitonde. It is now up to the cops to put an end to the attack. If you haven’t seen the show yet, it is highly recommended.

The four-part Netflix Indian web series in Hindi is based on four different Satyajit Ray stories and is directed by Indian film industry heavyweights. The first episode, directed by Srijit Mukherji, tells the story of a dominant corporate mogul who has always boasted about his eidetic recall until he encounters a woman he doesn’t recognize – thereby opening Pandora’s box. ⁣⁣⁣⁣

The second episode, ‘Bahrupiya,’ directed by the same person and starring Kay Kay Menon, is about a man who uses prosthetics, or mimics, to try to change his life (Bahrupiya). A famous singer meets a forgotten wrestler on a train in the third episode, directed by Abhishek Chaubey and starring Manoj Bajpayee. The fourth episode, directed by Vasan Bala (Raman Raghav), is psychedelic — on purpose. In Bollywood and religion, it’s all about “look” (dikhawa).

This series is a fundamental story set in the city of Nawabs, Lucknow, concerning three different age groups and their perspectives of love. The story is divided into three main tales and a number of minor stories. This is a nostalgic love story with a well-written story as iconic as the monument itself.

Ghoul isn’t your usual horror picture, with its jump scares and meaningless jolts; instead, it reinvents the genre by delivering a fascinating story set in contemporary India. And, like Blumhouse Productions’ “Get Out,” it ensured that the message was clearly communicated, and it is a superbly made, Netflix’s Best Indian web series in Hindi worth watching.

21 Sarfarosh is an extended, thorough, and well-narrated version of the film Kesari, which is based on the Battle of Saragarhi. This 65-episode series is a must-watch if you’re more interested in seeing an elaborate portrayal of the bravest fight ever fought, thanks to powerful actors, an emotive narrative, and memorable dialogue. On Netflix, it’s one of the best web series in Hindi.

Jamtara is Netflix’s best Indian web series desi. It follows the same crime genre but in a more elegant way. It takes the audience on a cinematic trip into the realm of crime via the lens of Budhia Singh’s celebrity.

The series conveys an underlying message about our society’s failure, which made life difficult for these young adults who sought freedom in many ways. It’s a good time!

Selection Day is a fantastic Netflix Hindi web series desi about two intelligent boys and their cricket adventures. The show depicts how for some parents, selecting a cricket team has become an obsession, while for others, it is still a game that must be performed correctly.

With their characters, Kavya and Dhruv from the online series Little Things, Mithila Palkar and Dhruv Sehgal have established a niche in the hearts of the viewers. Little Things is not a Netflix Hindi original, however, there are three seasons available on the platform. This Netflix Hindi web series is about an unmarried couple living in Mumbai.

The early twentieth-century Bengal of Rabindranath Tagore’s stories is set. They are set in a politically tumultuous period in Calcutta, where the characters arrive from a variety of rural, social, and cultural backgrounds to inspire the emergence of a new society.

It’s worth noting that Tagore’s female protagonists are nearly always risk-takers who defy family and society expectations. Rabindranath Tagore’s natural viewpoint in his stories and tales. A lovely adaptation of his stories that is available on Netflix.

The series is set in Kota, which has a swarm of coaching centers where students come from all across India to study for various admission tests. Vaibhav (Mayur More), a 16-year-old from Itarsi, travels to Kota for the show. It highlights city student life as well as Vaibhav’s efforts to seek admission to IIT. Jitendra Kumar, Ahsaas Channa, Alam Khan, and Ranjan Raj all give strong performances.

Love, friendship, relationships, heartbreaks, misunderstandings, unconditionally being there for your classmates, social media, parties, secrets, and so on are some of the clearest answers given by college students when asked what characterizes their lives. College life is a roller coaster, and the first season of College Romance, which is currently available on Netflix, captures this brilliantly.

This five-part series, directed by Chaitanya Kumbhakonum, is especially timely because it depicts student life. ‘Girls Hostel,’ which lasts 20 to 25 minutes per episode, has everything from a fun night out with friends to collegiate rivalry to keep viewers interested.

The authors (Ashish Manchanda and Shreyasi Sharma) have developed a simple story about these women getting together and exchanging important life lessons while dealing with their own personal issues, which include everything from controlling parents to eccentric wardens (played by Trupti Khamkar). Nothing is forced, and the screenplay is delivered in a very natural manner, capturing the actual essence of the story.

Zindagi inShort is a collection of short films directed by Guneet Monga and produced by Sikhya Entertainment, which has always strived to tell timely stories. This time, it takes the form of a compilation of seven short stories about people from all areas of life.

Now, summarising life is a challenging task in and of itself, but Zindagi inShort excels at tackling unspoken feelings and, most crucially, the physicality of them. From the flirting young world of internet dating to loneliness in the elderly, and from infidelity to marital rape, the local group manages to touch on significant themes that are not covered.

Alma Matters, a three-part Netflix documentary, does not attempt to answer Gokul’s questions. Instead, it employs his words as a guide to help it negotiate the extremely competitive academic milieu that surrounds IIT Kharagpur’s huge campus; a world inside a world.

Alma Matters is an intriguing series in and of itself, but it can’t help but remind me of a recently arrived fresher at the country’s top institution: full of promise but lost in its exaggerated illusions of what life will be like on the inside.

Read more: List Of Hollywood Web Series Dubbed In Hindi That Are Avaliable On Hotstar