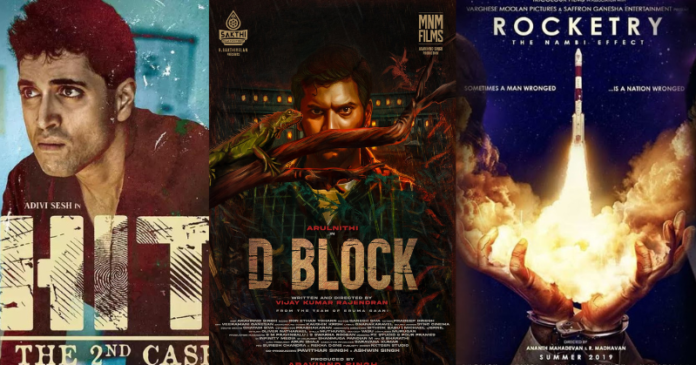 Here is the list of the south Indian upcoming movies that are a must-watch this year:

Kadhal 2 Kalyanam is a Tamil romantic comedy that was first expected to release in 2013, the movie stars Ramya and Sathya. Directed by Milind Rau, the upcoming south movie will release on July 13.

Director Vijay Kumar Rajendran made his debut film with this Tamil action drama. It features Arulnithi, Avantika Mishra, and Eruma Saani among others. The expected release date of this south upcoming movie is July 1.

This R Madhavan film is one of the best upcoming south Indian movies which was also screened at the Cannes Film Festival this year. It will be released on July 1 in both Tamil and Hindi. The story revolves around an ISRO scientist named Nambi Narayanan, who is wrongly accused of spying, and his struggle to clear his name.

Directed by Mithran R Jawahar, Thiruchitrambalam is a Tamil drama. It is expected to hit the movie theatres on July 1. This movie is a must-add to the new south movies list that features Dhanush and Rashi Khanna.

This film by N Lingusamy was simultaneously shot in Tamil and Telugu, and This south movie 2022 stars Aadhi Pinisetty, Ram Pothineni, Akshara Gowda, Krithi Shetty, and Nadhiya. It is supposed to release on July 14.

A Telugu romantic movie is set to be released on July 1 and is directed by Gireesaaya, Ranga Ranga Vaibhavanga’s cast includes Tej and Ketika Sharma.

Karthikeya 2 is a sequel to the 2014 Telugu film Karthikeya which releases on 22 July. The story of this supernatural thriller revolves around the lead character and his hardships on the way to the pursuit of truth. It is one of the most anticipated new south Indian movies.

Thankam is the first film by director Saheed Arafath. It is a Malayalam crime drama starring the amazing Joju George, Fahaadh Faasil, and Dileesh Pothan, and is set to release on July 6.

It is a sequel to the Telegu action film HIT. Written and directed by S Kolanu, this upcoming south movie will be released on 29 July.

Practically a sports drama, this film is directed by Nikhil Premraj and is set to release on July 7. The upcoming south movie 2022 stars Saiju Kurup, Anthony Varghese, and Balu Varghese among others.

Set your reminders and grab the tickets of your best pick from the upcoming south Indian movies listed above. Let us know in the comments if we missed out on any south movie releasing in July 2022.