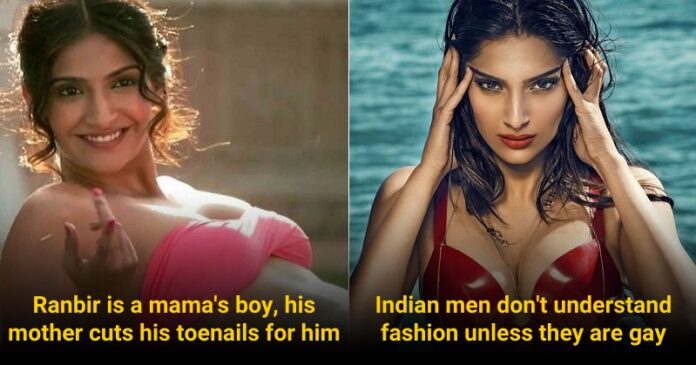 Sonam Kapoor, barbie of Nepotism of Indian Film Industry is quite famous for her fashion sense. But she is also famous for her “no filter” comments. She has also raised many eyebrows because of some bold replies and comments over the years. Here is the list of some extremely dark comments made by Sonam Kapoor. Let’s take a look at it:

Sonam was announced, brand ambassador of an international beauty brand L’Oreal in 2009. Before her, Aishwarya Rai was the face of the brand for many years. So, she expressed her dissatisfaction at the same. In an interview, when Sonam was asked about the same, then the actress said, “Aishwarya is an aunty from another generation.” She clarified it further and said, “Ash has worked with my dad, so I have to call her Aunty na?”

2. Ranbir Kapoor Is Not Boyfriend Material

After the debut movie Saawariya, Sonam Kapoor and Ranbir Kapoor were rumored to be in a relationship. Later, Ranbir got engaged with Deepika Padukone. In an interview, when Sonam was asked about the same, she said, “Ranbir is a great friend, but not good boyfriend material. I wonder how Deepika help on to him for so long!”

3. When She Insulted All Indian Men

During an interview with a Fashion magazine, she said, “Indian men don’t understand fashion unless they are gay.”

4. Talking About Her Physique

Sonam Kapoor got viral for her flat chest, to which she boldly said, “My t*ts and a*s are not very nice.”

5. About Dating Rumors In The Industry

In an interview, Sonam was asked about the dating rumors at the time of the release of movies. Targetting Deepika, she said, “Deepika has an over-enthusiastic PR team.”

6. About Bollywood Actresses Having Surgeries

Sonam was once asked on Koffee With Karan about who she thought had plastic surgery. She replied with no filter and said, “Honestly, lots of people. And they look really scary!”

Shobha De shared her views on Sonam Kapoor’s movie, I hate Luv Story. She said that the film should be called ‘I Hate Dumb Storys’. And, she also addressed Sonam as “a lassie who lacks oomph.” Sonam didn’t take the insult lightly and said, “Guys please don’t take Shobhaa De seriously. She’s a fossil who’s getting no action and going through menopause. So just for her.”

8. Flashed Middle Finger To The Press

Sonam held up her middle finger to stand up against the censorship board during the promotion of her film, Players. She said, “I don’t believe in censorship so whether they like it or not, I really don’t care about it. I just want people to come and see my film. Showing a middle finger is a part of today’s youth.”

During an interview with fashion magazine Vogue India, she said, “Are girls drooling over him (Ranbir)? Really? Ranbir isn’t sexy at all. Ranbir is a mama’s boy, his mother cuts his toenails for him.”

Sonam couldn’t hold back her tongue yet again and called Sonakshi Sinha dumb when Sonakshi said that she was a much better fashionista than Sonam. To this Sonam said, “Even I said plenty of foolish things when I was at that age. I give everyone the benefit of a doubt.”

Karan Johar had asked to give fashion advice to the following celebrities to Sonam. And for Parineeti Chopra, she said, “Don’t wear those tight clothes.”