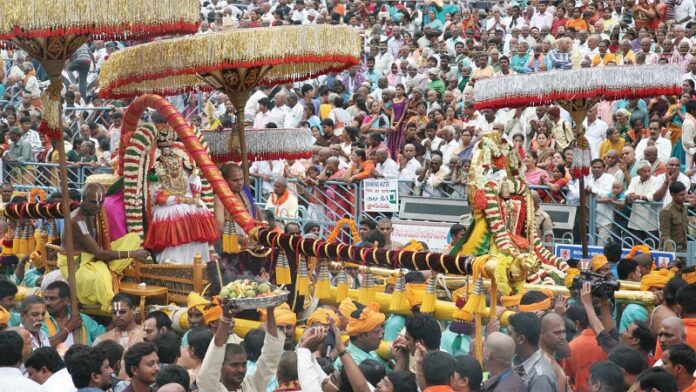 Andhra Pradesh is a renowned state in southern India, and you may learn about its lovely customs and culture during festivals. Besides that, it is also one of the most visited states in India due to its diverse culture and festivities. During these beautiful cultural and religious events, every telugite’s home gets decked with tremendous zeal. Several monuments, religious sites, and locations in the southern state have mythical and cultural significance.
Here is the list of some of the most famous festivals of Andhra Pradesh.

Pongal or Makara Sankranthi gets celebrated grandly throughout India, yet each area adds its own flavor to this lovely event. Makara Sankranthi is one of India’s most celebrated harvest celebrations. This event gets observed for three days in Andhra Pradesh.
The first day is Bhogi when people burn old belongings from their homes to rid themselves of negativity. The second day is Sankranthi when residences are attractively decked with rangolis and people dress up in new outfits. The event concludes on the third day, Kanuma.
Key Attraction of Makara Sankranthi: Beautiful rangolis in front of all houses, ox decorated beautifully, Cockfights, Delicious sweet and savory dishes, Bulls race.
When Makara Sankranthi is celebrated: January.
Where it is celebrated: All over the state.
Duration of Festival: 3 days.

In Hinduism, Ugadi celebrates the beginning of the new year according to the lunisolar calendar, and it is widely observed in Andhra Pradesh. In some regions of the nation, it is also known as Gudi Padwa. The festival’s signature dish is a pickle with six flavors: sweet, spicy, two types of sour, salt, and bitter, which represent diverse life experiences and how we should accept them.
Key Attraction of Ugadi: Preparation of a Ugadi Pachadi (pickle), a combination of six types of tastes, Panchanga Sravanam.
When Ugadi is celebrated: March or April.
Where it is celebrated: All over Andhra Pradesh.
Duration of Festival: One day.

Ganesh Chathurthi is a well-known event observed throughout India. This event, also known as Vinayaka Chaturthi in Andhra Pradesh, commemorates the birth of Lord Ganesha. On this auspicious day, devotees give Ganesha prayers with leaves and flowers. They cook modaks and rice balls, which gets regarded to be the deity’s favorite meals.
Key Attraction of Vinayaka Chaturthi: Large pandals with the idols of Lord Ganesha.
When Vinayaka Chaturthi is celebrated: August or September.
Where it is celebrated: All over the state, but popularly in Kanipakam, Machilipatnam.
Duration of Festival: 11 days.

Christmas offers joy not just to the people of Andhra Pradesh, but to people all across the world. This holiday remembers Christ’s birth, and people begin the joyous day by singing hymns about Jesus Christ’s wonderful acts. Several miles and fairs get held in Andhra Pradesh during this season. Syrian Christians celebrate this event with beautifully painted elephants, bright umbrellas, and heartfelt liturgical beats that are peculiar to Christmas in this state.
Key Attraction of Christmas: Beautifully decorated houses and churches, People singing religious hymns.
When Christmas is celebrated: December.
Where it is celebrated: All over the state.
Duration of Festival: Two days.

Sri Rama Navami honors Lord Sri Rama’s birthday. It also represents Lord Sri Rama’s marriage to Sita, which gets known as Sitarama Kalyanam. On this auspicious day, several dishes get prepared, but the most popular ones served as Prasad get soaked moong dal and panakam. Some of the most festivals in Andhra Pradesh.
Key Attraction of Sri Rama Navami: Kalyanam of Sri Rama and Sita.
When Sri Rama Navami is celebrated: March or April.
Where it is celebrated: Vontimitta, All over the state.
Duration of Festival: One day.

Diwali is another celebration that magnificently illuminates the whole state of Andhra Pradesh. It is one of the most important Hindu festivals and is also known as the festival of lights. It’s celebrated on the new moon day. The blackness of the moonless sky gets illuminated by spectacular pyrotechnics. Diwali in Andhra Pradesh gets known for its festivals and delicious delicacies.
Key Attraction of Diwali: Brightly lit houses and firecrackers.
When Diwali is celebrated: October or November.
Where it is celebrated: All across Andhra Pradesh.
Duration of Festival: One day.

Maha Shivratri is a celebration devoted to Lord Shiva that takes place on the night of Krishna Chaturdasi. People fast all day, visit temples in the evening, and stay awake all night chanting religious songs. Staying up all night or Jagran, individuals perform bhajans to keep their minds fresh. Shivaratri gets regarded as one of Andhra Pradesh’s oldest festivities. Some of the most festivals of Andhra Pradesh.
Key Attraction of Maha Shivratri: People fast throughout the day, sing Lord Shiva’s hymns, and stay awake the whole night.
When Maha Shivratri is celebrated: February or March.
Where it is celebrated: Kalahasteshwara temple, Bhramarambha Malikarjunaswamy temple.
Duration of Festival: One day.

Dussehra gets known as Vijayadashami and Dasara in southern India, and it’s celebrated for 10 days. During the first nine days of this festival, the goddess gets dressed as Lakshmi, Saraswathi, Annapurna, and so on, and on the tenth day, she gets to dress as Durga. Furthermore, some individuals have a practice known as “Bommala Koluvu,” which involves arranging dolls in an appealing fashion. One of the most festivals in Andhra Pradesh.
Key Attraction of Dussehra: The goddess gets dressed up in different avatars for nine days, and on the tenth day, she gets decorated as Durga Devi.
When Dussehra is celebrated: September or October.
Where it is celebrated: Vijayawada.
Duration of Festival: Ten days.

Muharram is the second holiest month in Islam, following Ramadan. Furthermore, Muharram is the first month of the Islamic calendar and marks the start of the Islamic new year. Muharram, in Muslim culture, acts as a doorway to fresh beginnings and new prospects in the future year and hence has a great significance in the Muslim culture. Furthermore, this occasion honors Hussein ibn Ali, and Muslims ask for sin forgiveness. One of the most festivals of Andhra Pradesh.
Key Attraction of Muharram: Muslims gather and pray for forgiveness for their sins.
When Muharram is celebrated: August.
Where it is celebrated: All over the state.
Duration of Festival: One day.

Srimanothsavam, the most important regional festival, it’s celebrated at Vizianagaram Pydithalli ammavaru temple in the coastal area of Andhra Pradesh. Sirimanu is a large tree that had cut in the shape required by the priest with the approval of the tree’s owner.
During the utsavam, the carved tree gets worshipped as Sirimanu. A spectacular procession of Sirimanu gets carried through the streets of Vizianagaram town on the festival day. One of the most enchanting festivals of Andhra Pradesh.
Key Attraction of Srimanothsavam: Anjali chariot, White elephant chariot, and Sirimanu phaladara.
When Srimanothsavam is celebrated: October-November.
Where it is celebrated: Vizianagaram.
Duration of Festival: More than ten days.

Rotiyaan ki eid, also known as Rottela Panduga, is an annual three-day event held at the Bara Shaheed Dargah in Nellore. This celebration, held in the month of Muharram, honors 12 martyrs whose mortal remains get buried in the enclosure. People come from all over the nation to visit the shrine and participate in the holy tradition of exchanging rotis.
Key Attraction of Rottela Panduga: People visit the shrine and exchange rotis.
When Rottela Panduga is celebrated: September.
Where it is celebrated: Barah Shaheed Dargah, Nellore.
Duration of Festival: NA

Prabhala Theertham or Prabhala Panduga is widely celebrated on the third day of the Sankranthi holiday Kanuma. The winter season brings nature to life in the Konaseema region, making it a popular tourist destination that also resonates with Telugu culture.
During this event, make Prabhu out of bamboo and then adorn it with colorful clothing and paper. This Prabhu gets utilized to place Lord Shiva’s idol and to visit Prabhala teertham by going straight to Jagganna thota. Tens of thousands of people flock to this location in search of a once-in-a-lifetime encounter.
Key Attraction of Prabhala Theertham: Shopping stalls, Colorful Prabhu, Crowds.
When Prabhala Theertham is celebrated: January.
Where it is celebrated: Konaseema.
Duration of Festival: One day.

Visakha Utsav is one of Andhra Pradesh’s most well-known cultural events, conducted by the state government. This four-day event allows you to discover the traditions of south India in a magnificent way. This festival’s highlights include history tours, clothing displays, flower shops, traditional crafts, sporting competitions, and cultural presentations. A vast crowd gathers to observe this happen.
Key Attraction of Visakha Utsav: Cultural shows, Sports events, Traditional crafts.
When Visakha Utsav is celebrated: End of December.
Where it is celebrated: R.K.Bridge, Visakhapatnam.
Duration of Festival: Four days.