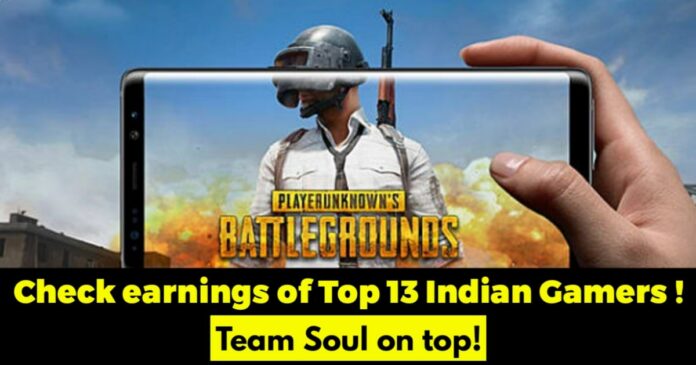 Indian Gamers and their earnings are rising, with the incoming of mobile games like PUBG, many new gamers have joined the online gaming league. Earlier it was limited to computers, which restricted a majority of users, but now the scene is different.

With so many users showing interest in the gaming world, some people devote themselves entirely to it. In India, we have our Gods of Gaming too. They don’t just play well and enjoy it, but their game brings them money! Actually, gamers can earn so huge that a corporate manager can be easily ashamed.

Let’s have a look at the best Indian Gamers in India and their total earnings. Get ready to be shocked!

List of Top Indian Gamers Rank Wise And Their Earnings

ScoutOP has a ranking 0f #13 in India and earned a whopping $10,955. He is a pro PUBG player who earned his highest one-time prize money of $7500 in PMCO Spring – India where he bagged the 2nd position.

A Dota 2 Player with a rocking gaming career and earnings of $12,495 or more till now. His highest single-tournament earning was $2,200, where he stood 5th in PvP Esports Championship (Dota 2). All over India, he stands at rank #12

PvP Esports Championship (Dota 2) and Cox Masters 2019 Phase II (Dota 2) are the events where he earned $2,200 by catching 5th and 3rd position respectively.

Tejas has an All-India Gamers Rank of #9.

$2,200 is the highest amount Balaji has ever earned in a single-tournament which was in the year 2018, where he stood in 5th-6th position at PvP Esports Championship (Dota 2).

Notably, Mihir has earned an amount from $10,000 at the event, Deadman Invitational Summer 2018, where he stood 2nd. And the second-highest amount of $7,500 came in from All Stars: PVP Championship in the year 2018.

Team soul consists of Mortal, vipeR, Owais and Ronak. It’s worth noting, that not just the team, even after considering their individual earnings, they still manage to be the highest-earning gamers in India according to the given series:

Teal Soul is now undoubtedly the best PUBG Mobile Squad out there in India. The team won PUBG Mobile Club Open – Spring Split: India and this event alone helped them earn a colossal amount of $60,000.

So. are you a gamer too? What are you waiting for? Go and give your best efforts in the game because who knows, the next list might feature you! And for the curious minds, this data is based upon revelations by essportsearnings.