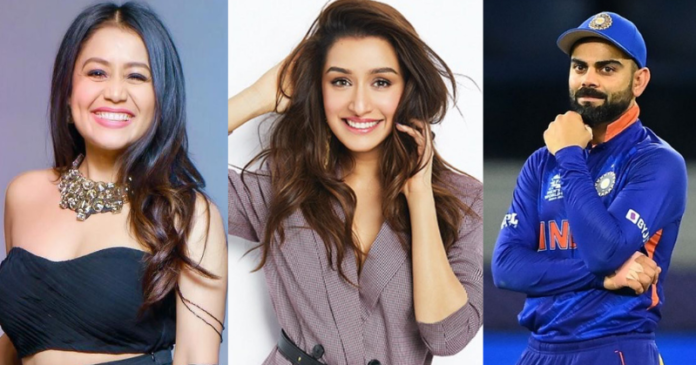 One of the most popular and most used social networking applications, Instagram is user-friendly and visually appealing. It is young and tries its best to keep things interesting by rolling out new features. The younger generation who flock to the social media platforms is more active on Instagram. Their new feature reels (short videos) have made it more popular and the number of content creators is increasing day by day.

You will find most Indian celebrities and public figures on the platform with an unimaginable number of followers. Some of them have millions of followers and a few of them even rank among the most followed Instagram accounts all over the world. We have made a list of the top 20 most followed person on Instagram in India.

One of the youngest actresses in Bollywood, the daughter of actor Saif Ali Khan and actress Amrita Singh has millions of followers on Instagram. Sara is one of the most followed Indian on Instagram.

Varun is one of India’s highest-paid actors, he has worked on several Hindi films in Bollywood. He is also quite popular for his dancing skills. Varun has worked on movies like Badrinath ki Dulhania, Badlapur, Kalank, etc.

Jannat Zubair is a popular Hindi Television actress who started her career as a child artist. She is one of the youngest who has the most Instagram followers. Jannat is a social media icon and influencer.

No doubt Hrithik has 42.9 million followers on Instagram, he is one of the most prominent actors who has won several awards and accolades for his performance in the Hindi films of the Bollywood industry. He has one of the top Instagram profiles.

The fresh and bubbly actress in the Bolly industry secures the 16th position among the personalities with most Instagram followers in India. The actress worked in several Hindi movies like Luka Chuppi, Bareilly ki Barfi, and Heropanti.

The Miss Diva Universe 2015 has a profile that has the most followers on Instagram in India. The diva is also popular for her dancing skills and has worked on some Hindi and south Indian films like Hate Story 4, Sanam re, Kaabil, etc.

An actress in the Hindi film industry and a model has one of the most followed Instagram account. She is also popular among the youngsters for her fitness. She also shares her workout on her Instagram to influence others. She was featured in various successful movies like M.S. Dhoni: The Untold Story, Bharat, and Baaghi 2.

One of the most popular and highest-paid actors in Hindi cinema of all time, Salman Khan falls under the category of the most followed Instagram accounts. He’s appeared in numerous Hindi movies throughout his career and is a popular host of the reality TV show Bigg Boss.

Also Read: 30 Most Beautiful Women In The World Based On Insta Follower

A former adult film star and model Sunny Leone is among the ones who have the most Instagram followers. Sunny is presently an actress in the Hindi film industry and has appeared in movies like Ek Paheli Leela, Ragini MMS 2, and Mastizaade.

Anushka Sharma is currently a producer and actress in the Hindi film industry, who also has her own clothing line. Anushka is married to cricketer Virat Kohli. The popular actress has worked in several successful movies such as Band Baaja Baraat, Rab Ne Bana Di Jodi,  Ae Dil Hai Mushkil, and PK.

Jacqueline Fernandes is a Sri Lankan actress who has appeared in several movies like Kick, Murder 2, Bachchhan Paandey, etc. and lives in India. Jacqueline is among the people who have highest Instagram followers in India.

Akshay Kumar has been working in the Hindi film industry for ages and is one of the leading actors in Bollywood. He was also the highest paid actor in 2020. He has appeared in numerous movies, including superhits like Aitraaz, Mr and Mrs Khiladi, Welcome, Namastey London, and Housefull.

One of the leading actresses in the Bollywood industry, who appeared in several successful movies like Namastey London, Ek Tha Tiger, Zindagi Na Milegi Dobara, Ajab Prem Ki Ghazab Kahani, and Welcome. Katrina is among the Indians who have the highest followers on Instagram. She is popular for her beauty and has her own cosmetic line. She is married to the actor Vicky Kaushal.

Alia Bhatt is one of the prominent actresses in the Hindi film industry who started very young. She has appeared in several superhit movies, including 2 States, Raazi, Gully Boy, and Highway.

Deepika Padukone is a Hindi film actress who predominantly works in the Bollywood industry. She has worked in several super hit movies like Bajirao Mastani, Piku, Yeh Jawani Hai Deewani, and Padmaavat. She is also the face of many Indian and International brands. No doubt she is among the top 10 with the highest followers in Instagram.

Narendra Damodardas Modi is very popular among the Indians and is also a well-known name worldwide as he is an Indian politician and the current Prime Minister of India. He is one of the most followed person on Instagram in India.

Neha Kakkar is a media personality and a renowned singer. She is also popular as a judge on the popular singing reality TV show, Indian Idol.

One of the cutest actresses and a wonderful dancer and singer, Shraddha is among the ones who has the most Instagram followers. She has been a part of several Bollywood projects like Aashiqui 2, Ek Villain, and Baaghi.

A prominent name in both Indian as well as Hollywood movies, Priyanka Chopra is one of the top celebrities and she has one of the top Instagram profiles among Indians. She is married to singer Nick Jonas (Jonas Brothers). Priyanka acted in numerous successful movies, such as Dostana, Bajirao Mastani, Barfi, The White Tiger, and Fashion.

The Indian who tops the list is the Indian cricketer and former skipper of the Indian National team, Virat Kohli. Kohli has the highest followers on Instagram in India.

We hope you guys liked this list of the most followed Indians on Instagram. Do you follow any of them? Let us know in the comments below!

Also read: 30 Instagram Worthy Saree Poses For Girls That Will Rock Your Next Photoshoot