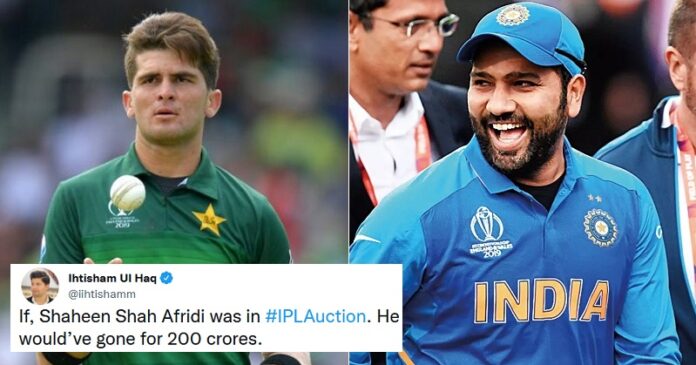 The IPL 2022 mega-auction came to an end on Sunday evening, the ten IPL franchises picked up 2 to 4 players. The auction took place in Bengaluru and continued for two days where the total amount spent by all the teams is a whopping INR 551.7 crore. The auction was held to build the teams for the 2022 edition of the Indian Premier League.

The bidding in the mega auction was quite intense and some huge buys took place. Out of 600 players in the auction pool, some prominent players missed out on reserving a spot in the franchises which shook the fans.

The biggest buy in the auction was Ishan Kishan who was locked by the Mumbai Indians who paid a massive amount of Rs 15.25 crore to keep him. The bidding war became strong when 4 teams fought for Deepak Chahar. CSK succeeded at keeping him for Rs 14 crore.

The fans have taken over social media by reacting to the IPL 2022 mega-auction deals. Amidst all these, Pakistani journalist Ihtisham Ul Haq is getting trolled on social media for making a big claim regarding the 2022 IPL auction.

The journalist, Ihtisham Ul Haq took to Twitter and stated that if Shaheen Shah Afridi, the Pakistani bowler had participated in the mega-auction of IPL 2022, his bidding would have gone up to 200 crores. He wrote:

“If, Shaheen Shah Afridi was in #IPLAuction. He would’ve gone for 200 crores.”

If, Shaheen Shah Afridi was in #IPLAuction. He would’ve gone for 200 crores.

Well, the Pakistani journalist’s claim created quite a buzz on social media as it didn’t go down well with Indian fans. The offended Indian fans are now trolling the journalist on Twitter.

Check out the Twitterati’s reaction:

In Indian currency that translates to 4 rupees. https://t.co/xMLePjbrHm

Imran Khan may use him for repaying China’s loan instead of trading Pakistan’s Women. https://t.co/j71pciGCo7

another chance to pay off their cripplings debts gone https://t.co/akj6hHhy6o

Gift “Shaheen Shah Afridi” to #China🇨🇳, as it may save your “Karachi Port”. https://t.co/BWTFPzAk9O

Then Ask Your So Called PM @ImranKhanPTI to write off ur country’s debt by lending him to World Bank!! https://t.co/4S82UEwhXw

If, Shaheen Shah Afridi was in #IPLAuction. He would’ve gone for 200 crores.

Who is Shaheen Shah Afridi?

Shaheen Afridi is a left-arm pacer who made his debut for Pakistan in 2018 and has since played 21 Tests, 28 ODIs, and 39 T20Is in which he has taken a combined 184 wickets. The 21-year-old is highly rated for his ability to generate bounce thanks to his height, and generate swing at a high pace.