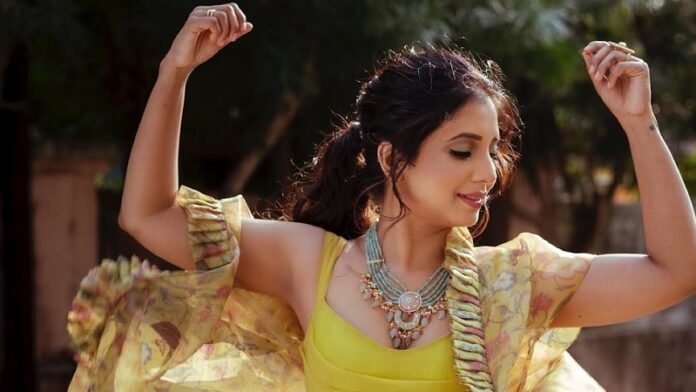 The Chennai Super Kings young opener, Ruturaj Gaikwad is one of the most promising cricketers in the world right now.

The young cricketer’s International career has been limited to just three T20I matches as of now due to his injuries, health problems, and tough competition within the Indian cricket team but his presence in the Indian T20 league makes him a fan favorite.

Just before the T20I series against Sri Lanka, he had hurt his right wrist and had to be ruled out of the entire series. But he has recovered just in time while training at the National Cricket Academy (NCA) in Bengaluru and has finally reached the CSK camp in Surat.

Besides this, the star opener has been in the limelight for his personal life. The fans have been curious about “Who is Ruturaj Gaikwad’s girlfriend?” because of Ruturaj’s social media activities.

Now, Who is Ruturaj Gaikwad’s girlfriend?

Who is Sayali Sanjeev? Here’s all you need to know about her:

Sayali Sanjeev is a popular Marathi actress, born in 1993 in the Dhule district in Maharashtra. She completed her schooling at Dhule High School and graduated with an Arts degree from Nasik college. She is the daughter of the Tahsildar of Nashik district, Sanjeev Chandsarkar.

She has been the face of several brands like Birla Eyecare, Do it, and Quikr brands. She also received the Best Actress Award of Zee Marathi in the year 2016.

Sayali’s work as an actor

The Zee Marathi series ‘Kahe Diya Pardes’ brought Sayali to the limelight, she rose to fame for her stunning performance on the show. She has been featured in a number of TV serials like ‘Gulmohar’ and ‘Perfect Pati’. She was recently seen in a series called ‘Shubhmangal Online’.

Sayali Sanjeev had previously stated that besides performing, she also takes part in several social activities and is interested in politics. She was appointed as the vice president of Chitrapat Karmachari Sena by the MNS president Raj Thackeray, citing her previous social work with acting in 2020.

Sayali’s Career Across All Media Platforms

Sayali Sanjeev has worked in three TV shows and one YouTube web series called U Turn (2019) between 2016 and now. With Jhimma (2021) being her latest release, she has also been credited in eight films, so far. Sayali also made her music video debut in Lajira in 2020. She will soon be seen in an upcoming Marathi movie Goshta Eka Paithanichi.

Check out some of her stunning pictures: