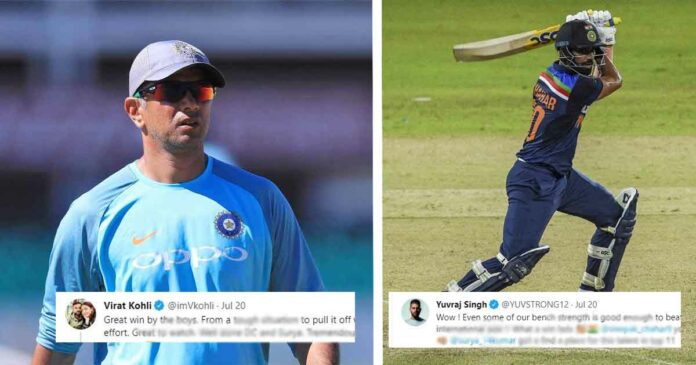 On 20th July, India managed to win against Sri Lanka in a very tight chase. India is currently playing a 3-match ODI series followed by a T-20 in Sri Lanka. Coach Rahul Dravid in an inspiring dressing room speech said that team India responded like champions with its back to the wall. His young side registered a win in the second ODI against Sri Lanka here.

India was reduced to 193 for seven in 36th over while chasing 276 for victory on Tuesday. However, Deepak Chahar (69) and Bhuvneshwar Kumar (19) shared an unbroken 84-run stand with three wickets in hand and five balls to spare.

Dravid said in a video posted on BCCI.tv, “Obviously we finished on the right side of the result, which is incredible and fantastic but even if we didn’t finish on the right side of the result, it is the fight all the way through was absolutely brilliant, so well done to all of you.” He continued, “We said they were going to respond, we knew we had to respect the opposition. The opposition was going to respond, they’re also an international team. They responded, and we responded back like a champion team. With our back to the wall, we found a way to break them. So really well done to all of you. Fantastic job.”

DO NOT MISS THIS!

Even though it is a big reason to celebrate in and of itself, this is Rahul Dravid’s first major coaching assignment with the senior team as well, and he came through. BCCI also shared the images from the series and appreciated them.

Although we are really hoping BCCI releases the full speech at some point but for now, Twitter was flooded with tweets in praise for the Indian team post-match. Even Kohli and Yuvraj couldn’t stay behind:

Wow ! Even some of our bench strength is good enough to beat an international side !! What a win lads 👏🏽🇮🇳 @deepak_chahar9 you can bat 👊🏽 @surya_14kumar got a find a place for this talent in top 11 !congratulations skipper @SDhawan25 #rahuldravid and the whole team #INDvSL

Great win by the boys. From a tough situation to pull it off was an amazing effort. Great to watch. Well done DC and Surya. Tremendous knocks under pressure. 🇮🇳

Let’s check some of the tweets by the netizens:

How did Deepak Chahar finish the match so well? #deepakchahar #CSK #INDvSL

In this Rahul David’s team.
There is no one is which is bigger then game.
Everyone is feeling equal and secure.
Hatsoff to present team management.#INDvSL@BCCI @SGanguly99 https://t.co/reEYVPOPdc

We need to respect the opposition. They were suppose to respond, and they responded but we found a way to win: Coach #RahulDravid ❤️ https://t.co/wugiHbBxFK

CSK blood after all, bound to perform 🦁💛 or else will face this wrath in CSK training camp 🤣 #INDvSL pic.twitter.com/8mdBEESK5O

They responded.. we responded back ❤️ https://t.co/GT8jCFGAtL

Later, Deepak Chahar reveals Rahul Dravid’s words before he walked out to play against Sri Lanka. He said at the post-match presentation ceremony, “No better way to win the match for the country. Rahul sir told me to play with all the balls. I’ve played a few innings with India A and I think he has belief in me.” He continued, “He told me he thinks I’m good enough to be a No. 7. He has belief in me. Hopefully, in the coming matches I don’t have to bat.”

What a sight , Dada as Bcci president , Wall as Indian Coach , Looking Forward For More Surprises that destiny have planned for the vintage fans !#SouravGanguly #RahulDravid #TeamIndia

Groomed by the Legend @msdhoni Polished by the Wall !! #RahulDravid https://t.co/3dV12VIT15

He deserves to be the coach of the Indian Team ❤️
So much respect for this man ❤️
#RahulDravid #SLvsIND #SLvIND #IndianCricketTeam pic.twitter.com/NhgJUw1R1x

The video also featured Suryakumar, Bhuvneshwar, and Chahar. They were talking about their experience with the match. Suryakumar said, “I don’t have words, I think it is one of the best games which I have been part of, I have seen live… it is an unbelievable victory.” He further continued, “Bhuvi, our vintage man and DC, we have been talking about his batting, and today he has proved himself, it was a complete team effort. It was something special from Deepak Chahar.”

Dravid can do no wrong according to us, as a player or a coach. And, it makes us even fonder of him.