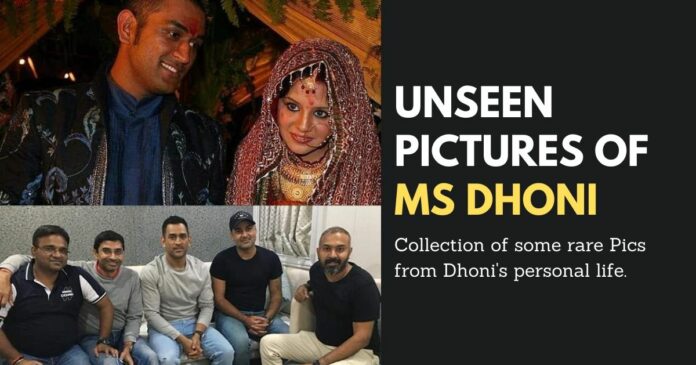 MS Dhoni is such a famous personality in India that thousands of his photos are doing rounds on the internet all the time. The India media just loves the superstar that Dhoni is and likes to follow him everywhere he goes.

However, there are still a few photos of Dhoni which are not seen by a lot of people. Here are some of the rare, unseen pictures of the former Indian captain –

This is one of Dhoni’s old photos with RP Singh. Dhoni and RP Singh were close friends much before either of them played for India. Dhoni comes from Jharkhand (previously a part of Bihar), and RP comes from Uttar Pradesh.

Because of the very similar cultural background, the two gelled together while they were playing domestic cricket. The friendship continued for years while they both progressed in their respective careers and played for India.

This is a photo from the ad shoot in which two of India’s World Cup-winning captains, MS Dhoni and Kapil Dev, had to take part.

The ad film shoot was at Eden Gardens. When Dhoni and Kapil reached the Eden Gardens in Kolkata, they were greeted by another former Indian captain Sourav Ganguly who was also the president of Cricket Association of Bengal (CAB) at that time. Three Generations One Field! Always a legendary sight.

#3 Dhoni With His Childhood Friends

This is the picture of Dhoni with his childhood friends after he became the Indian captain and won all the ICC tournaments.

Generally, people tend to forget their childhood friends when they reach a level of global recognition, but that’s not the case with Dhoni. The times when he goes to Ranchi these days, he likes to meet his childhood friends and spends a lot of time with them.

#4 Dhoni With His First Bike

This is the picture of Dhoni with the first-ever bike that he bought. The 39-year old has a huge collection of bikes and cars now, but his first bike Yamaha RX135 remains very close to his heart.

If you ever get a chance to sneak into Dhoni’s Garage, You can see the Yamaha RX 135 parked with pride along with all the modern-day sports bikes that Dhoni owns.

This picture was clicked on the airplane when Dhoni and the late Sushant Singh Rajput, who acted in Dhoni’s biopic, were travelling together to promote the movie.

Dhoni’s biopic “MS Dhoni – The Untold Story” was a massive hit on the Box Office and Sushant’s incredible acting was one of the reasons behind it.

A rare image of Dhoni’s wedding Sakshi Singh Rawat (now Sakshi Dhoni) on July 4, 2010. She was Dhoni’s schoolmate and the couple tied knots just a day after the couple got engaged. Sakshi was studying hotel management and was working as a trainee at the Taj Bengal, Kolkata while they got married.

Dhoni received India’s third-highest civilian award, Padma Bhushan from President Ram Nath Kovind at Rashtrapati Bhavan on April 2, 2018. He attended the honorary occasion dressed as an army officer. Dhoni was conferred the honorary rank of Lieutenant Colonel in 2011 by the Indian Territorial Army for his contribution in the Cricket world.

5 Famous Cricketers Who Married Their Relatives Or Friends’s Wife