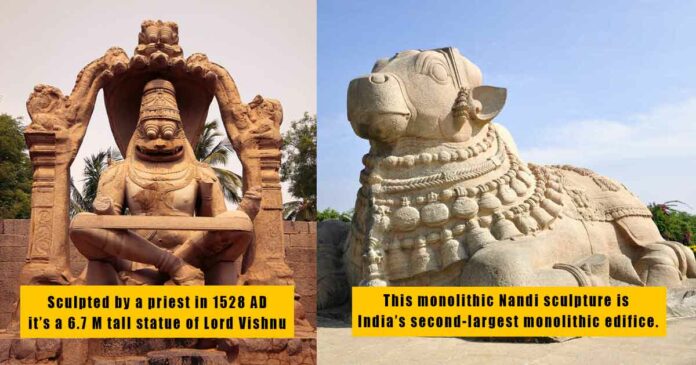 India has a long history of being a country rich in culture and traditions. In addition, India still has many old structures, monuments, and locations that highlight and contribute to India’s charm, attracting visitors, historians, and travelers from all over the world. Though the capital city and a variety of palaces, tombs, and monuments may be found in North India, the allure of South India is unrivaled in an entirely other way. The historical and cultural assets of South India are unrivaled. Its historic ruins, temples, monuments, and cities tell a fascinating story of this part of the world’s past. If you are interested in history, you should include some of these sites in your South India itinerary. If you’re looking for some excellent legacy sites to visit in South India, your search is finished because we’ve put together a small list of the region’s best historical sites.

Here’s a list of 15 historical monuments from the southern region of India:

A priest sculpted the statue during Krishnadevaraya’s reign in 1528 AD. The monument of Ugra Narasimha in Hampi is one of the city’s most famous idols. It is one of Hampi’s largest monolithic idols, at 6.7 meters tall. It is considered to be one of the finest examples of Vijayanagara Kingdom sculpture. Narasimha’s idol is Lord Vishnu’s fourth incarnation, with a half-human, half-lion form. He sits atop the sacred guardian snake’s coils, with the serpent’s seven hoods serving as a protective canopy over his head. The four arms of the statue have been fractured, and it has been severely damaged. The sitting figure of his consort Lakshmi has also vanished. It is counted as one of the most heritage monuments of India.

It took nearly two years to carve the Buddha figure out of a single piece of stone. Around 200 sculptors worked diligently to construct this beautiful piece of art. It’s built of white granite stone found on a mountainside in Nalgonda, some 40 miles south of Hyderabad. Few people are aware that the Buddha statue in Hussain Sagar is also a religious pilgrimage. In the year 2006, the spiritual leader Dalai Lama himself consecrated it. Also known as one of the most cultured monuments of India.

The famous stop on a Kanyakumari trip is Saint Thiruvalluvar’s huge monument, which stands on a 38-foot plinth. This statue was created by the Tamil Nadu government in honor of Saint Thiruvalluvar, definitely one of the greatest Tamil poets and philosophers. This flawlessly sculpted stone monument stands on a 38-foot-long pedestal to represent Thirukkural’s 38 chapters of morality. The Saint Thiruvalluvar Statue is approximately 133 feet long when the pedestal height is taken into account. Thirukkural’s 133 chapters are likewise represented by its 133-foot height. Thirukkural, as well as many other brilliant works, were written by Saint Thiruvalluvar. Several beautiful phrases and teachings from this ancient Sangam Literature classic are represented in the monument. The statue is a must-visit in the list of 10 monuments of India around the world.

Adiyogi is based out of the Isha Yoga Center. Its 112-foot height symbolizes the 112 paths to moksha (liberation) mentioned in the yogic tradition, as well as the 112 chakras in the human system. A hallowed linga, Yogeshwar Linga, was placed in front of the statue. The statue is part of the official Incredible India campaign of the Indian Ministry of Tourism. It also features a light and sound show depicting Shiva as a yogi, which was opened by India’s President, Ram Nath Kovind. It is counted among the 10 monuments of India.

After Muhammad Quli Qutb Shah, the fifth monarch of the Qutb Shahi dynasty shifted his capital from Golconda to Hyderabad due to a scarcity of water, the Charminar was built in 1591. The Archaeological Survey of India lists the Charminar, and there are various theories as to why it was erected. The shifting of capitals from Golconda to Hyderabad under Muhammad Quli Qutb Shah, who prayed for the abolition of Cholera, which had claimed many lives in his city, and took an oath to erect a mosque on the spot where he prayed, are the two most plausible candidates, according to historians. Charminar stands on the location where the pandemic came to an end. The Charminar’s strategic location at the crossroads of historical trade routes connecting Machilipatnam’s port and Golconda’s marketplaces explains why the old city of Hyderabad sprang up around it. This is one of the most spectacular historical monuments of India.

The Gommateshwara monument is one of the world’s tallest monolithic statues, fashioned out of a single block of granite. It is a 58-foot monolithic monument in Karnataka, India, in Vindyagiri near Shravanbelagola. It is so tall that it can be seen from 30 kilometers away. It represents Jainism’s values of peace, nonviolence, self-sacrifice, and humble living.
It is one of the world’s largest free-standing statues, dating from circa 983 C.E. Chavundaraya, a Ganga dynasty official and commander, commissioned the statue’s creation. Jain temples are known as basadis and various images of the Tirthankaras can be found in the surrounding locations. The Jain hero Bharat, Bahubali’s brother and the son of the first Tirthankara Adinatha are honored at Chandragiri. From the top of the hill, one may enjoy a stunning view of the surrounding countryside. The famous monument is counted among the best historical monuments of India.

The Lepakshi Nandi is alone granite outcropping. The monolithic Nandi sculpture is India’s second-largest monolithic edifice, after Gomateshwara at Shravanabelagola. It has a height of 20 feet and a length of 30 feet. The Nandi statue wears a muvvalahara, a bell chain with tiny horns, as a necklace. It’s worth observing that the bull’s head is held aloft at a slightly different angle than usual. Furthermore, the statue lacks Nandi’s characteristic expression of obeisance in front of Shiva. It is one of the famous monuments of India.

On Goubert Avenue, the French War Memorial honors all of the courageous troops who gave their life for their country during World War I. The memorial was created in 1938 by the governor of the time, Crocicchia. The memorial, on the other hand, was inaugurated on April 3rd, 1938. Gandhi, one of India’s most famous independence warriors, is commemorated in Pondicherry by a statue that stands just across from this historical site. Every year on July 14th, the memorial is spectacularly lit to honor those brave martyrs. People have gathered from all around the region, as well as neighboring cities and villages, to pay their respects. It is one of the famous monuments of India.

They are majestic structures that have endured the test of time and nature’s whims. They were built in honor of the Golconda kings who had passed away. Banjara Darwaza is a one-kilometer-long wall that runs north of Golconda Fort. They are stunning architectural wonders that serve as reminders of the Golconda rulers’ magnificence, who are buried nearby. The Qutub Shahis built these graves, which are among Hyderabad’s oldest historical attractions. A large number of these tombs can be located on a high platform. They are the only place in the world where the entire dynasty is buried in one location, and they are built in the Persian, Pathan, and Hindu architectural styles, with grey granite and stucco ornamentation. They’re flanked by intricately carved stonework and lovely gardens. The Tombs are the most reliable source of information regarding the architectural traditions of the Qutub Shahi dynasty.

11. Descent Of The Ganges

The Descent of the Ganges is a monument in Mamallapuram, Tamil Nadu, India, on the Bay of Bengal’s Coromandel Coast, in the Chengalpattu district. It’s a gigantic open-air rock relief that measures 96 by 43 feet and is carved on two monolithic rock boulders. The mythology depicted in the sculpture is that of Bhagiratha, who brought the sacred Ganges from the heavens to the earth. The water of the Ganges is thought to have magical properties. The Ganges’ descent and Arjuna’s penance are represented in stone at the Pallava heritage site. The relief serves as a canvas for some of India’s best rock-cut sculpture, which is found nowhere else in the country.

One of the most well-known attractions in Pondicherry is the statue of Mahatma Gandhi, the Father of the Nation, which is located near Promenade Beach. The statue was constructed by Roy Choudhary, a well-known sculptor. The eight exquisitely carved pillars that surround the Mahatma Gandhi statue are the main attraction of this popular tourist spot in Pondicherry, aside from the monument itself. In 1866, these monolithic granite pillars were transported and built from Gingee Fort, about 68 kilometers from Pondicherry. The Gandhi Statue, however, was erected just across from the Old Pier in 1965. The Gandhi Statue is the third-largest effigy of Mahatma Gandhi, standing at a height of 4 meters. Underneath the monument lies a tunnel that leads all the way to Gingee. The government has already taken steps to desilt the tunnel in order to make it operational. As a result, just a few people died of asphyxiation, and the tunnel was eventually closed. It is marked as historic among the monuments of Indian history.

The Gomateshwara statue in Karkala was built in 1432 CE by Veera Pandya Bhairarasa Wodeyar of the Santara dynasty under the tutelage of Lalita Kirti, the Bhattaraka of Karkala Jain Matha. The greater statue was inspired by the lesser Gomateshwara statue at Shravanabelagola, which was built in 983 CE. It is situated in Karkala, in the state of Karnataka. It’s the world’s second-tallest Bahubali statue, behind the one in Shravanabelagola.

The Aayi Mandapam (Park Monument) is a white monument in Pondicherry, India, that was created during Napoleon III’s reign as Emperor of France. It is in the heart of Bharathi Park. During his reign, he provided water to the French city, which is commemorated by this monument. It was named after Ayi, a female courtesan. She demolished her own home in order to build a water reservoir for the city.