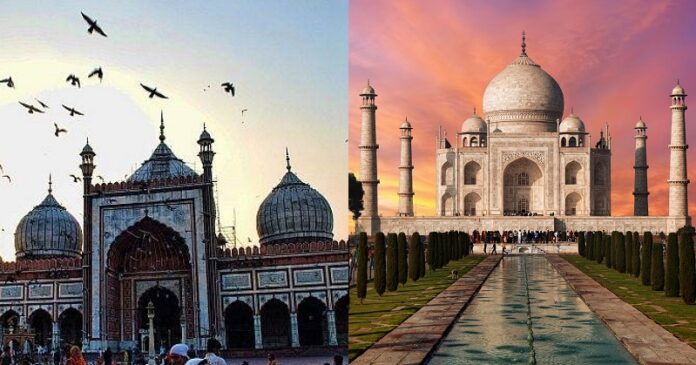 India is a diversified country. The northern region has a significant chunk of the country’s rich history. The beautiful, lavish monuments of India, part of the country’s culture and tradition. Some of the most unusual and greatest works of art are found in North Indian monuments. They showcase the mastery of artists from a bygone era. North India includes Delhi, Himachal Pradesh, Jammu and Kashmir, Haryana, etc. Monuments of India come in a wide range of styles. Also with combinations of Indian antique architecture and civilizations.
Here’s a list of 15 historical monuments of Northern India to mesmerize you:

Mughal Emperor Shah Jahan erected this monument. In memory of his loving wife, Mumtaz Mahal, who died while giving birth to their 14th child. This monument is beautiful even from afar as a testament to love. Considered as one of the top 10 monuments of India.
The visitors can’t enter the tombs, many tourists meander through the garden. Also, around the mausoleum to see the gleaming artwork. Luster of the marbles from all over the world, as well as the 28 different species of semi-precious stones.

Constructed in 1080 AD. When Akbar reconstructed the fort in 1573 AD, the red sandstone façade sprang to life. Since then, the Agra Fort has grown in importance. Today considered one of India’s most prominent sites.
The Agra Fort is a magnificent edifice. It has wonderful artwork on the sandstone and marble walls. It is one of the historical moments of India.

For Sikhs, the Golden Temple, also known as the Harmandir Sahib. One of the holiest sites in India. The Amritsar Sarovar, the Sikhs’ holiest river, is at the heart of the sanctuary. The Golden Temple’s architecture is a beautiful blend of Islamic and Hindu influences.
The lower level of the temple has beautiful marble flooring. Also, walls with animal and flower patterns.

The Jama Masjid, located in the center of Old Delhi. It is one of the few sites in the city where one may find peace and tranquility. The mosque is white and pink in color and stands alone. The mosque’s lofty minarets are a highlight. Offering spectacular views of Delhi’s magnificent metropolis.

Built in the 12th century. It’s situated on Pahalgam’s scenic slopes. Lord Ganesha, said to have guarded the temple and refused to let trespassers in. The stone temple is a must-see for everyone. Also, for people interested in learning more about Pahalgam’s culture. It is one of the best monuments of India history.

Fatehpur Sikri was the first planned city of the Mughal Empire. The city is full of beautiful mosques and mansions. These are not only remarkable architectural works of art, but they are also gorgeous to look at.

One of the first constructions built by the Mughal Empire was Humayun’s Tomb. King Akbar, the Mughal king of the time, commissioned it. The beautiful architecture of Humayun’s Tomb is a pleasure to behold. The mausoleum’s magnificent red sandstone architecture and superb geometric pattern are well-known.

This 240-foot structure is Delhi’s crown jewel. Qutb-ud-din Aibak and his heirs constructed the tower, which rises tall. Balconies surround the magnificent tower on all sides.
An Indo-Islamic architectural style is being used to construct the structure. It’s part of the Qutub complex. Also includes the Quwwat-ul-Islam mosque and a variety of other attractions.

The Red Fort is the most famous and prominent fort in India. On Shah Jahan’s command, built and has since housed several nobility and emperors. Also, considered to be one of the top 10 monuments of India.
The fort’s exterior, studded with diamonds, but as kings lost money, the jewels chipped away. Today, the Red Fort is a prominent landmark. The site of the Prime Minister’s yearly address to the nation on Independence Day.

The All India War Memorial, known as the India Gate. Located on New Delhi’s Rajpath. It is one of the famous monuments of India. The Arc de Triomphe in France, the Gateway of India has all liken to India Gate’s massive structure. This is a 42-meter-high historical building. It is one of the country’s largest war memorials, designed by Sir Edwin Lutyens. The annual Republic Day Parade, held at India Gate, is well-known.

This historic site, also known as Agar Sain Ki Baoli or Agrasen ki Baoli. Located on New Delhi’s Halley Road. An ancient water reservoir, Agrasen ki Baoli. It is a mosaic of diverse stones and rocks that rise from the depths of the soil to stand on 103 stone steps.
One of the hidden among the city’s commercial buildings and residential complexes. The structure’s antique brick walls take you back in time. Also, as you descend the steps, you’ll notice a drop in temperature. Agrasen ki Baoli is a protected monument. It comes under the Archaeological Survey of India’s Ancient Monuments. Also, Archaeological Sites and Remains Act, 1958.

The Bala Quila Fort, also known as the Alwar Fort, is located in the Aravalli Ranges above the town of Alwar. It was established in the 15th century by Hasan Khan Mewati and ruled by the Marathas, Yadavas, and Kachwaha Rajputs.

A young fort is referred to as a ‘Bala Quila.’ Laxman Pole is the sole metaled road between the Fort and Alwar city. Only this metaled entrance is supposed to have been used by Pratap Singh, the founder of the Alwar state. It is one of the famous monuments of India.

The Kangra Fort, in Himachal Pradesh’s Kangra district. has seen thousands of years of magnificence, invasion, battle, richness, and change. This powerful fort is based on the ancient Trigarta Kingdom, which is mentioned in the Mahabharata epic.

One of India’s oldest dated fort and the largest fort in the Himalayas. Originally one of Punjab’s and Himachal’s most prominent hill stations. It occupies the lower valley of the Beas and its tributaries. It is one of the historical moments of India.

Jantar Mantar is a massive observatory in New Delhi’s south Connaught Circle. Located on Parliament Street. It was built to aid and improve time and space studies. Finally, it is one of a series of five observatories in Jaipur, Ujjain, Varanasi, and Mathura. It was built in 1724 by Maharaja Jai Singh. It is one of the best monuments of India history.

The Mehrauli Archaeological Park offers a glimpse into a bygone era. It is a convenient on-the-go visit. With distinctive architecture that will catch your eyes. It will attract at every step due to its close vicinity. Also, it is to significant south Delhi attractions.

This magnificent jewel of history. Contains the ruins of the Lal Kot erected by the Tomar Rajputs from the 11th century A.D. It is less than a kilometer away from the UNESCO World Heritage Site of the Qutab complex. It is nestled away and scattered over a 200-acre area.

Top 10 Best Honeymoon Places In India To Visit This December