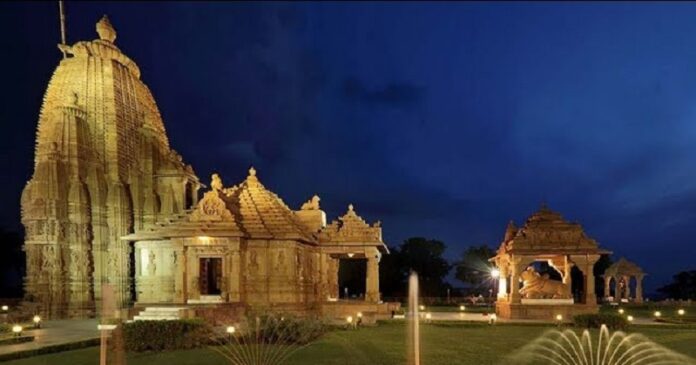 Birla Mandir (Birla Temple) refers to different Hindu temples in India. It was built in different cities across India by the Birla family. All these temples are magnificently built. Some of them are even built with sandstone or white marble. The temples are generally located in a prominent location of the town. The first temple was built by Jugal Kishore Birla and his brothers, as well as their father collectively in 1939 in Delhi. Later, the temples have been build and managed by different branches of the family. This temple has been dedicated to Goddess Laxmi and Lord Vishnu (Narayan).

History Of Birla Mandirs Across India:

For centuries, Delhi and Bhopal were being ruled by Muslim dynasties. They never gave permission to construct grand Hindu temples with Shikhara. The prohibited the building of Hindu temples. And this was the primary reason for building Birla temples.

It was only the Birla family that constructed the first magnificent Hindu temple in Delhi. It was known as Laxmi Narayan Temple. It has been designed to be spacious and lofty. The temple is suitable for congregational discourses and worship. The temple conforms to the Nagar style of architecture and has been built using modern technology. Bhopal and Varanasi temples have been built using modern construction materials and techniques as well.

They have been built using sandstone and white marbles. The construction style is mainly adopted by the Chaulukya style of the 10th – 12th century. The Gwalior Sun Temple is considered a replica of the famous Sun Temple of Konark. Moreover, the Saraswati temple of the BITS Pilani Campus is one of the few Saraswati temples of modern times. It also has images of philosophers and scientists with Gods and Goddesses.

All the Birla Temples have marvelous architecture and have been built in a grand style. In the late twentieth century, they have become major landmarks of Indian urban life. These temples are regarded as the modern ideals of humanitarianism and philanthropy.

Birla Mandirs are located in various parts of India. A leading industrialist in the nation, Birla’s family constructed these temples in different cities in India. These white marble constructions which are dedicated to various gods display architectural excellence. Let us travel to these parts to have an idea about Birla Mandirs.

The Laxmi Narayan Temple is famously known as the Birla Temple of Delhi. It was constructed by Jugal Kishore Birla and his brothers, as well as their father collectively in 1939. In the Birla Mandir, the temple has many portrayals of Indian mythology in Geeta Bhawan. Laxmi Narayan temple architecture is inspired by the Oriya style of architecture. It is filled with gardens and foundations. It has many paintings of artistic excellence of Jaipur artists which reflect the cultural heritage of the land.

The Birla Mandir (Varanasi) is popularly known as New Kashi Vishwanath Temple and is situated in the Banaras Hindu University premises. In 1931, the foundation stone of the temple was laid and completed after almost three decades. The main deity in the temple is Lord Shiva and its spiral top is 252 feet in height. It houses seven temples in all where Lord Shiva temple is on the ground and the temples of Laxmi Narayan and Goddess Durga are on the first floor.

Since 1961, the clean, green, peaceful spiritually rich area surrounding Shri Radha Krishna Mandir in the heart of Kanpur city. It is popularly known as JK Birla Temple which was established by the Birla Group. In 1941, the foundation of this temple was laid, and by 1961, the construction was completed. It is considered to be a unique blend of modern and ancient architecture.

The Birla Mandir (Kurukshetra) was constructed in the year 1952 by Jugal Kishore Birla. The temple has been focused on Lord Krishna. Arjuna and Lord Krishna have been portrayed in a large-sized marble chariot which is the main attraction here. It is drawn by four marble horses and other marble characters around the chariot as well.

The Birla Mandir, Sharda Peetha (BITS Pilani) was built in the year 1959. It is a white marble marvel of the twentieth century that covers a sprawling 25000 square feet area. It is dedicated to Goddess Saraswati. The temple stands on 70 pillars and is built in the Indo-Aryan style of architecture. Also, its pyramidical tower is 110 feet in height.

Satyanarayana Swamy Aalayam (Birla Mandir) was constructed by Birlas in 1957. Built with Kota stone brought from Agra and Jaisalmer, Sandstone sourced from Vindhya ranges, and marble from Rajasthan, this temple follows an architecture style that evident across Birla Mandirs in India. The main Deity is Swamy Narayaranan in the main garbhagriha with Lord Surya and Lord Shiva is separate garbhagrihas.

The Birla Mandir (Bhopal) is located on top of Arera Hills and has been dedicated to Goddess Lakshmi. This 1960 temple sports a sandy-yellowish shade and has rich greenery all around the temple. Apart from Goddess Lakshmi and Lord Vishnu, the idols of Lord Shiva and Goddess Parvati are also there. There is also a museum here that has many ancient sculptures from the 12th century.

Tulsi Manas Mandir is one of the most famous temples in the city of Varanasi. In Hinduism, this temple has great historical and cultural importance. The temple was funded by the Thakur Das Sureka family of Bandhaghat and its construction was finished in 1964. The temple was constructed in white marble and there are verses and scenes from Ramcharitmanas that are engraved on the marble walls all over the temple.

The Birla Mandir (Shahad) was built in 1965 and is popularly known as Vithoba Rukmani Temple. On both sides of the temple’s gate, two huge-sized elephants are carved in stone. The temple walls have fine carvings of different Hindu Gods.

The Birla Mandir (Renukoot) is popularly known as Shri Renukeshwar Mahadev Mandir which was built by the Birla Group in the year 1972. The main entrance has carvings representing the Sun God on the chariot while the second gate has carvings of elephants on either side. Its rich landscape with garden fountains elevates your spirits.

In the year 1976, the Birla Mandir (Hyderabad) was constructed. The temple was constructed by Birla Foundation. It is located amidst the top of Kala Pahar to the southern end of Hussain Sagar Lake. The main deity in the temple is Lord Venkateshwara. The temple is a mixture of South Indian and Oriya styles of architecture. There are illuminating lights and the eleven feet tall granite image of Lord Venkateshwara. The “Mukha Mandapam” of the temple has carvings in marble of Indian mythology.

In the year 1970, the construction of the Birla Mandir Kolkata was started. It took twenty-six (26) years to complete the temple. It was built by the industrialist Birla family. The temple has been dedicated to Radha and Krishna. While the dome to the right contains the deity of Goddess Shakti, its left side dome houses the idol of Goddess Durga. Its architecture is in excellent Rajasthani style. It also contains depictions from Bhagavad Gita in the stone engravings.

The Birla Mandir (Gwalior) is popularly known as Birla Sun Temple. The foundation of this temple was laid in 1984 and after four years, in 1988, it was completed. Sun temple is located in Murba Kshetra and was constructed by Gansam Das Birla. This temple is dedicated to Lord Sun. This temple was constructed in the shape of a chariot. Depicting 7 days of the week, there are four on one side and three on another side.

Below the Moti Dungri Fort, the Birla Mandir (Jaipur) has been located. It was built by the B.M. Birla Foundation. The temple was built in the year 1988 and is popularly known as the Laxmi Narayan Temple. It has been dedicated to Goddess Laxmi and Lord Vishnu. A Maharaja allegedly sold the Birla family the land for the temple for one rupee. The temple walls have quotes from Bhagavad Gita. The highlights of the temple are sculptures of saints as well as famous personalities such as Socrates and Buddha.

Birla Mandir built in the capital of Bihar, Patna is dedicated to Laxmi Narayan. That is why it is also called the Laxmi Narayan temple. The Birla Mandir is an important attraction in this city.

The Birla Mandir (Akola) is famously known as Shri Ram Temple. Apart from Birla Mandir, Akola (a city in Maharashtra) has many famous temples. Along with many other famous temples, the Birla temple attracts devotees in large numbers.

The Birla Mandir is a major tourist attraction in the beautiful city of Nagda. The temple is dedicated to Lord Vishnu and has a picturesque garden as well. The temple has amazing architecture with intricate designs and has a vast expanse of the garden as you enter the temple complex.

Birla Temple is on a hilltop near “Salav village”. It is just 20 kilometers away from Alibag after revdanda on the Alibaug, Roha route. A part of the Birla Udyog Group, Vikram Ispat company has built this temple. The temple is dedicated to Lord Ganesha. It has marble floors and the ceiling of the temple is transparent which allows ample light to come in.

Brajrajnagar is an industrial city in Odisha and is famous for coal mines and paper mills. In this otherwise industrial locality, the Birla Mandir is an important attraction.

So, you see that the Birla Mandirs have been constructed and are housed in some big metropolitan cities as well as in some remote places in various parts of India. Each Birla Temple is a blend of ancient beliefs and modern style and displays architectural brilliance. Ensure you make a trip to the temple if you to tour a place that houses the Birla mandir.

Things To Know Before Going To Morni Hills In Haryana

Raigad Fort In Maharashtra With Images & Everything You Need To Know

Exploring The Manchester Of India, Ahmedabad And It’s Secrets

Things To Know About Chakrata Hill Station In Uttarakhand Before Visiting